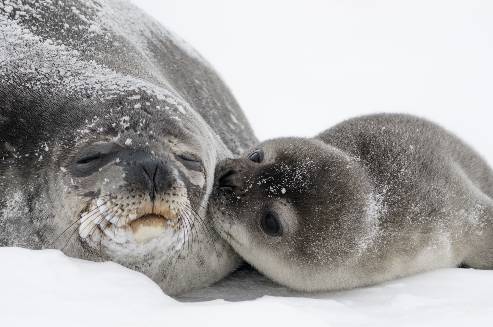 A breeding population of Weddell seals, a prominent Antarctic high-level predator associated with fast ice, has been intensively studied in Erebus Bay at the southern extent of the Ross Sea since 1968. The long-term database, which includes data for more than 28,000 marked individuals, contains detailed information on the populations and individual animals that provide excellent opportunities to study linkages between environmental conditions and demographic processes in the Antarctic.

The Erebus Bay population of Weddell seals in Antarctica's Ross Sea is the most southerly breeding population of mammal in the world. The population's location is of special interest as the Ross Sea is one of the most productive areas of the Southern Ocean, and one of the few pristine marine environments remaining on the planet. The study population is ideal for increasing understanding  of population dynamics of long-lived species because population members have strong site fidelity, are readily approached and tagged during the pup-rearing period, and have been intensively studied for 40 years. From 2002-2021, the project was conducted by Robert Garrott, Jay Rotella, and Donald Siniff through grants to Montana State University from the National Science Foundation. Results of analyses conducted on hte project over the past 20 years have documented strong annual variation in reproduction, abundance, and population composition. 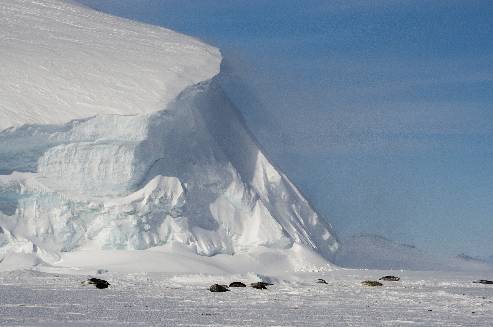 A new award in 2022 to Montana State University (Jay Rotella,  Principal Investigator) continues the long-term population study during 2022-2026. The project will maintain the long-term database (1978-present) and extend previous work by evaluating the geographic origins and demographic roles of females born elsewhere that join the Erebus Bay population as adults. The project will also evaluate possible drivers of annual variation in overall population dynamics, assess genetic differences between locally born mothers and those born outside the study area, and document patterns of gene flow among seal colonies in the Ross Sea region. By adding those new aspects to the project, our research team seeks to better understand the population's structure, function, and genetics and to provide key information for predicting how the seal population will respond to environmental change.

The study will continue to provide detailed data on individual seals to other science teams, educate and mentor individuals in the next generation of ecologists, introduce two early-career, female scientists to Antarctic research, and add genomics approaches to the long-term population study of Erebus Bay Weddell seals. Nancy Chen, an Assistant Professor at the University of Rochester, and Elizabeth Flesch, a postdoctoral reserarcher at Montana State University, will be the core team members implementing the genomics analyses. Kaitlin Macdonald (Ph.D. student) and Parker Levinson (M.S. student) are current graduate students on the project

The project also includes a robust informal science education program that is adding to the project’s recent successful efforts at producing and delivering short-form videos that have been viewed over 1.6 million times to date. In addition, the education program will add new topics such as learning about seals using genomics and how seals respond to a changing world to a multimedia-enhanced electronic book about the project’s long-term research on Weddell seals, which will be freely available to the public early in the project. Mary Lynn Price and Jeremy Schmidt are the core team members leading the outreach efforts.

The current project is funded by the National Science Foundation through the U.S. Antarctic Program as a collaborative project with an award to Montana State University with Jay Rotella as Principal Investigator and an award to the University of Rochester with Nancy Chen as Principal Investigator. The project is funded for the period July 15, 2022 through July 31, 2027.