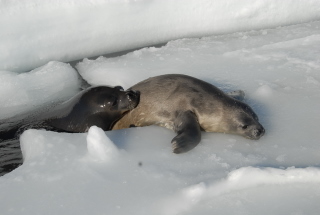 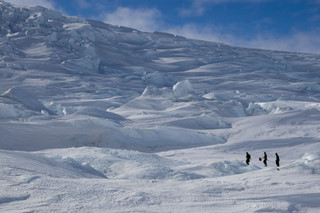 Weddell Seal Science Web Portal - The portal provides access to project information and multimedia, as well as a video blog documenting recent field seasons through short videos describing Weddell seal biology, our studies on Weddell seals, our study location, and our field work.  The work presented here was produced by video journalist and education video producer Mary Lynn Price, who lived and worked with our team for much of the 2010 field season and parts of several other seasons.

Weddell Seal Science Video Podcasts at iTunes featuring short videos about Weddell seals, some of the project's research, and our field work.  These video podcasts can be viewed on computers, mobile devices, and some TVs.

A video created by video journalist Mary Lynn Price that's hosted on NSF's Science360 Knowledge Network that describes new work investigating whether Weddell seal pups that spend more time in the water learning to swim with their mothers have a higher probability of surviving to return and have pups of their own.

Studying Antarctic Seals - a video on the Teacher’s Domain web site that features our project. This was created by video journalist Mary Lynn Price and is part of a larger teacher’s resource pool that was produced by WGBH public television out of Boston as part of a collection funded by the National Science Foundation.

Women Working in Antarctica is a website produced by video journalist Mary Lynn Price to present short video portraits of some of the many women working in Antarctica.  The videos were created during the 2008 Austral Spring and Summer Seasons.  One of the portraits is of Jen Mannas, who was a  Master's student with us and whose thesis project focused on body mass dynamics in Weddell Seals.  As well as providing good information on Jen's graduate work, the video also provides great footage of the seals and the area where we study them.  The interview with Jen is also available as an iTunes podcast as one of iTunes' Featured Educational Technology Podcasts. Jen's interview is featured in Episode 1.

POLAR-PALOOZA is a multimedia initiative - supported by both NSF and NASA - involving researchers, Alaskan natives, in-person presentations at science centers and natural history museums, video and audio podcasts, and more.  In 2007, a film crew visited our project and produced a podcast with excellent footage of the seals and the area in which they live.