Students and other Lab Members 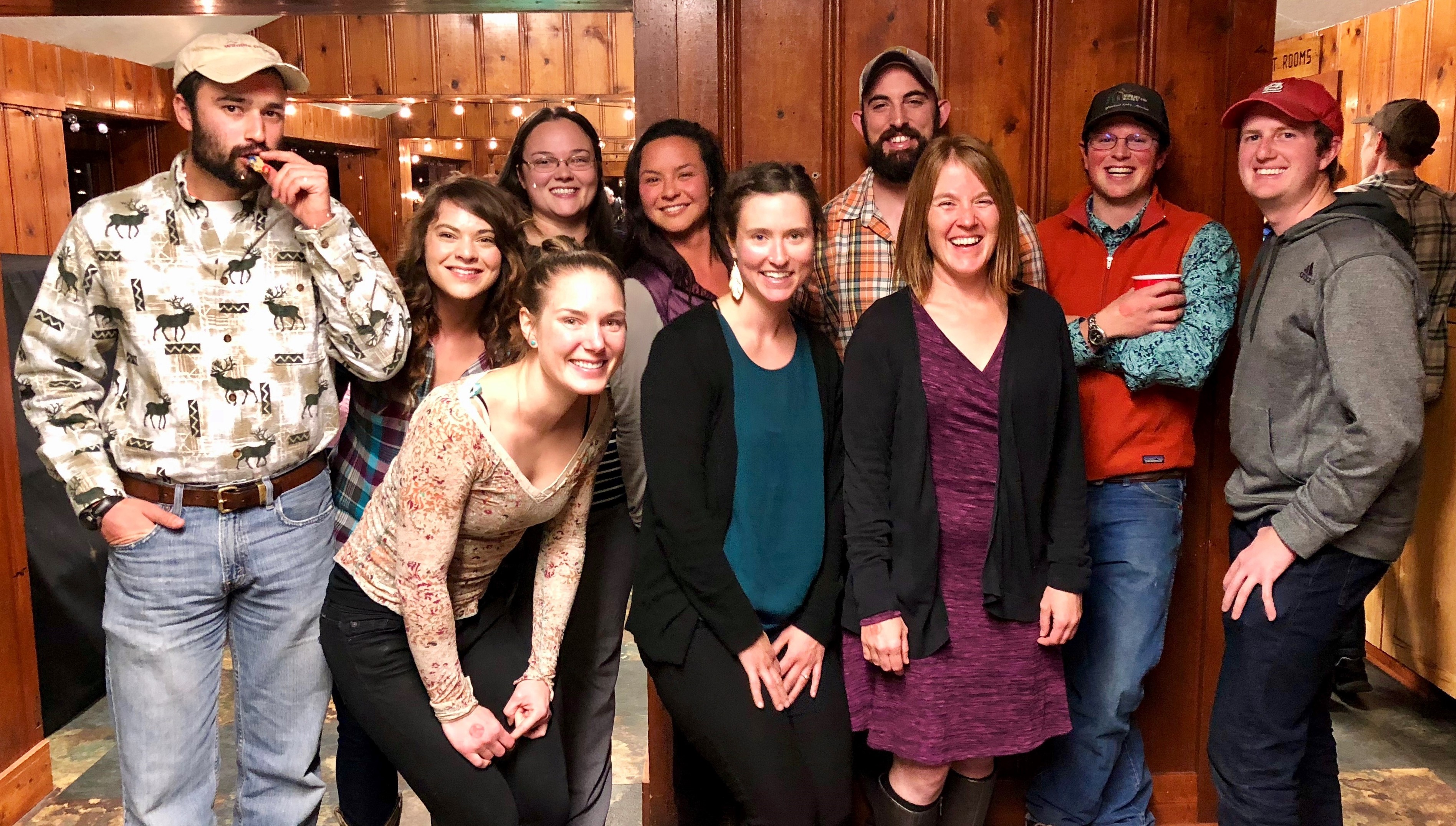 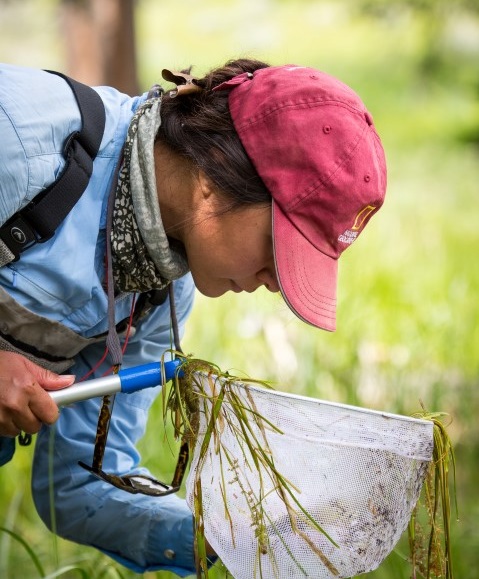 Mary joined the lab in fall 2016.  She worked closely with Dr. Andy Ray and Kristin Legg as part of the Greater Yellowstone Network (National Park Service) and continued in this position throughout much of her graduate degree. Her research is focused on understanding dynamics of the species using wetlands. 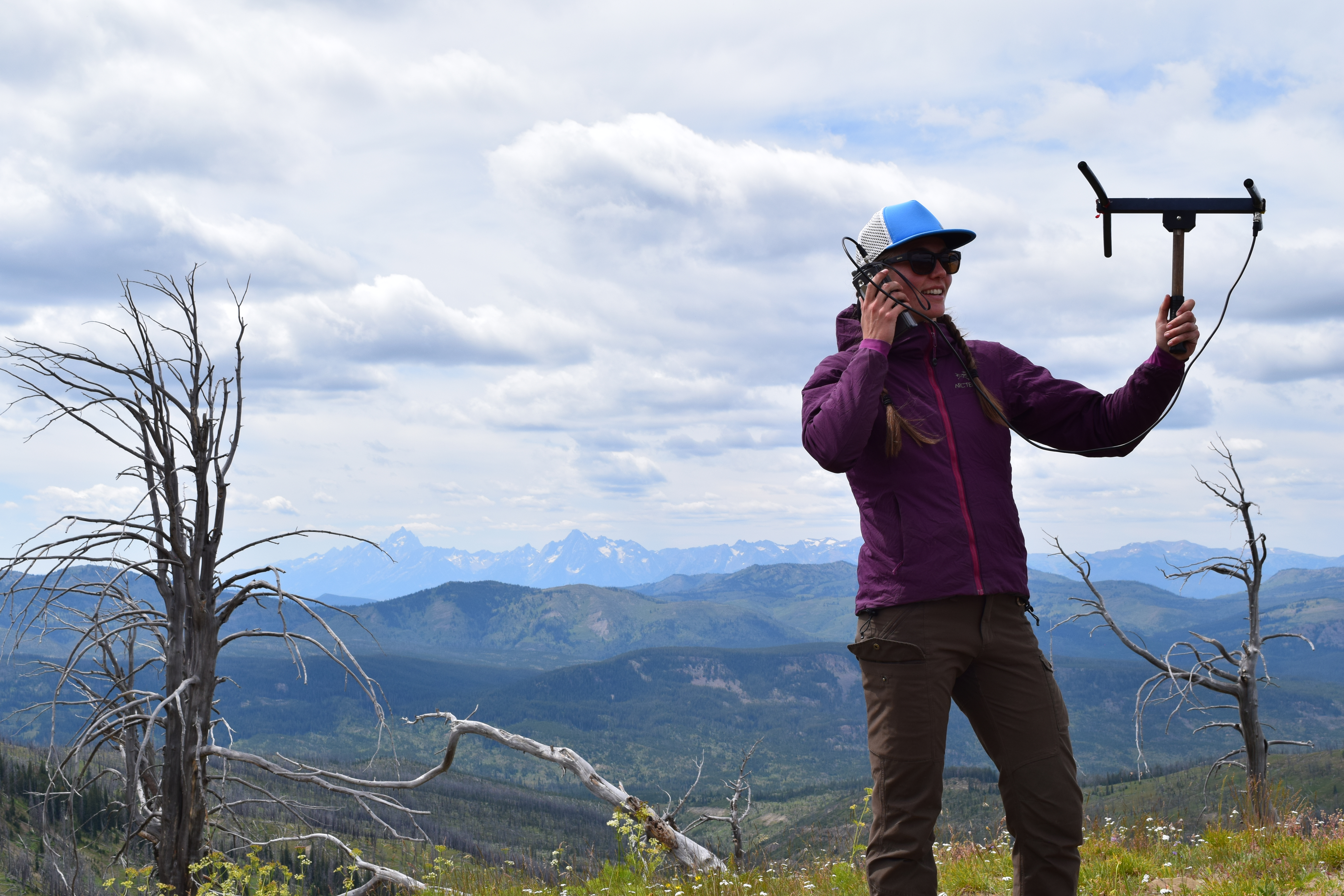 Elise joined the lab in fall 2019.  Her work focuses on understanding resource selection by grizzly bears in Yellowstone and Grand Teton National Parks.  This project is a partnership between NPS, USGS, and Yellowstone Forever. 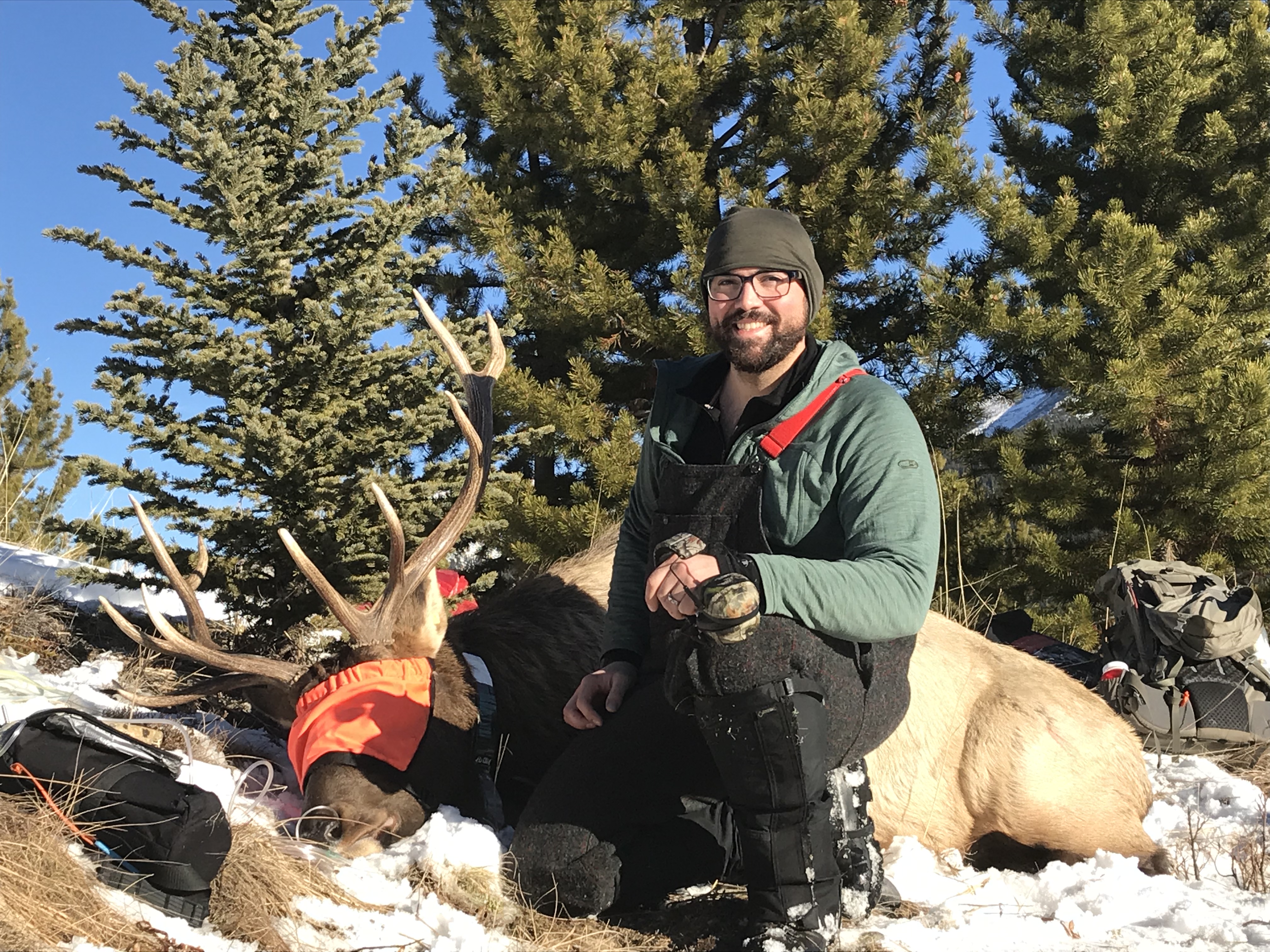 Thomas began his graduate program in spring 2019.  He is examining the efficacy of restoration treatments aimed to retain and spread water/snow melt to create mesic meadows.  Although the treatments should improve habitat quality for many species, Thomas is sampling plants and arthropods.  The project is a collaboration with US FWS (Kyle Cutting) and The Nature Conservancy (Jim Berkey and Sean Claffey), among others. 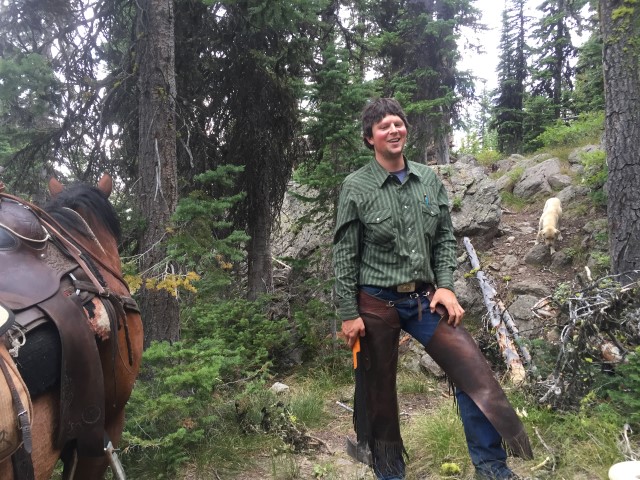 James joined the lab in January 2017.  He is working to better understand the influence of wintering habitat on spring body condition, nest success, and brood survival of sage grouse, in collaboration with Kyle Cutting at Red Rock Lakes NWR and Bok Sowell at MSU.

James is currently working for The Nature Conservancy as the High Divide Headwaters Land Steward and Science Manager.

Ethan is exploring potential changes in selected families of beetles in response to the addition of low-tech structures intended to restore areas formerly characterized as mesic meadows.  He is working closely with Thomas Sutton. 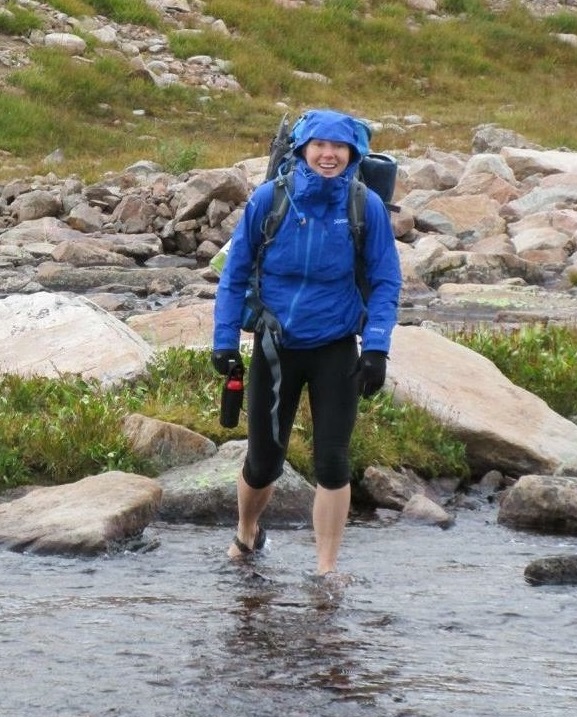 Dr. Banner joined the group in January 2017 as an ecological statistician.  Katie focused on improving statistical inferences based on acoustic survey data to inform monitoring and conservation of North American bats,in collaboration with Dr. Kathi Irvine (USGS) and other researchers from the National Park Service.

As of fall 2018, Katie began working as a professor in the Department of Mathematical Sciences at MSU. 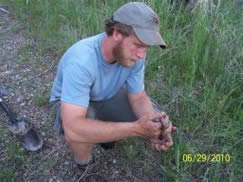 Dan focused on understanding the mechanisms that alter abundance of small mammals in ecosystems dominated by nonnative plants. We partnered with MT Fish, Wildlife, and Parks to complete this work.

Dan defended his thesis in May 2014.  He currently is the Senior Zoologist for the MT Natural Heritage Program.

Brian investigated the effects of tanglehead on the bird community in grasslands. This is an interesting question because tanglehead is native to the United States, but in recent years it has begun to behave like an invasive species in parts of south Texas, increasing in distribution and dominance.

Brian defended his thesis in November 2012 and currently is working for Southern California Edison as a biologist. 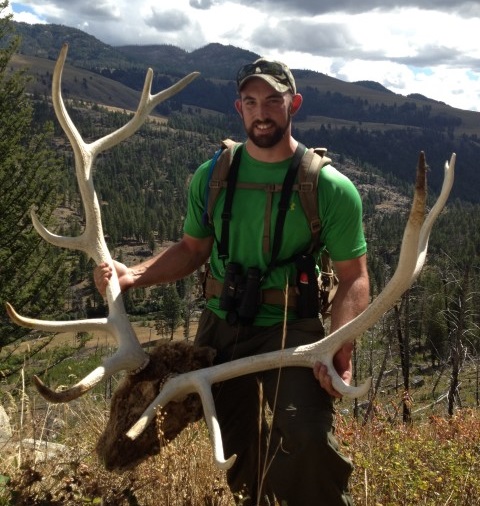 Nate joined us in fall 2016 to understand habitat use and estimate the population size of black bears in the Northern Range of Yellowstone.  His graduate program was funded by Yellowstone Forever. Nate also was part of a study that used camera collars to learn about bears.  Check out the amazing footage from these collars included this interactive coverage by National Geographic.

Nate defended his thesis in March 2020.  He is currently preparing several manuscripts for publication, as well as working with researchers at University of Wyoming.

Erin successfully defended her thesis in June 2011, ran the Wildlife Austin program, and works as a Natural Resource Biologist for Travis County, TX. 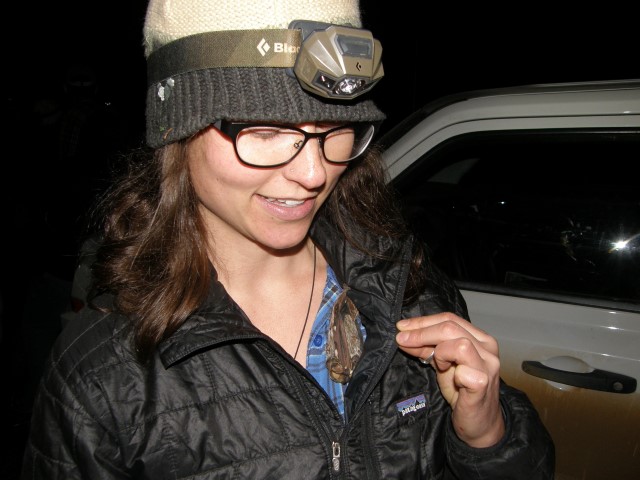 Shannon joined the group in summer 2016 and focused examining roost use and foraging by bats in forests with distubrance from beetle kill.  This work was a collaborationwith MT Fish, Wildlife, and Parks, US Forest Service, and the Bureau of Land Management, who contributed funding to the project.

Shannon defended her thesis in March 2020 and is currently a wildlife biologist with Westech Environmental in Helena, MT.

Ross successfully defended his thesis in June 2015.  He is now a PhD student at the University of Montana. 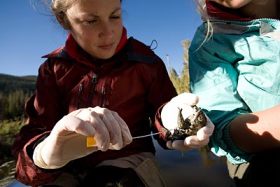 Erin investigated whether we could add habitat complexity to montane lakes to provide refugia for long-toed salamanders from populations of stocked fish. Her work was supported in part by MT Fish, Wildlife, and Parks.

Erin defended her thesis in April 2014. In March 2018, she defended her dissertation on hellbenders at Purdue.  She is now a Fish and Wildlife Biologist with USFWS in Boise, ID. 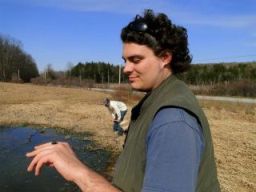 Adam investigated the effectiveness of various soil modification treatments as tools to restore grasslands invaded by Old World bluestem grasses in Texas. He examined plant and arthropod communities to assess treatment effects. Adam was supported by a Welder Wildlife Foundation Fellowship, as well as funding from the Texas Parks and Wildlife Department.

Adam defended his thesis in June 2014 and his dissertation at the University of Delaware in December 2018. He is now an assistant professor at Tarleton State University. 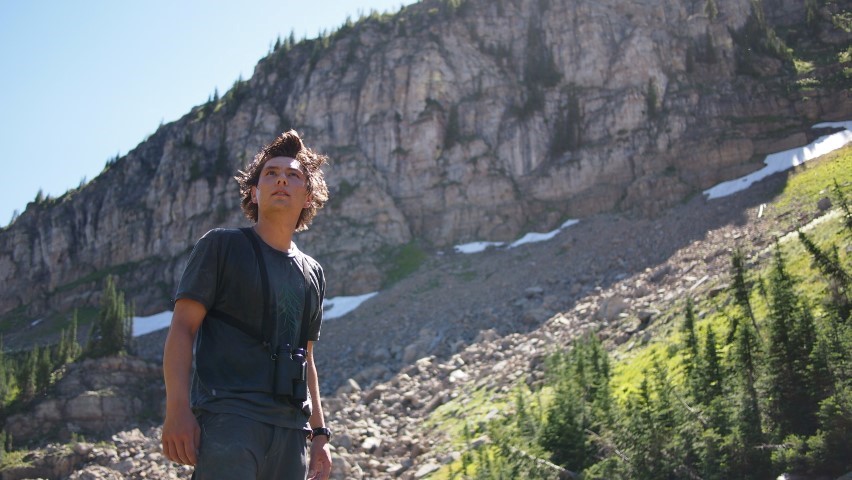 Ben joined the lab in summer 2014 and examined habitat relationships of hoary marmots. We collaborated with MT Fish, Wildlife, and Parks, who also funded the project. You can learn more about his work inthis video from Montana Fish Wildlife and Parks.

Ben defended his thesis in September 2016 and then worked with Weddell seals in Antarctica and elk in Montana.  He is now an assistant district biologist for the Washington Department of Fish and Wildilfe.

Mark focused on examining the effects of high-intensity wildfire on small mammal communities at the Chaparral Wildlife Management Area (WMA) in southern Texas. A large wildfire burned much of the WMA in March 2008 and Mark quantified post-fire recovery.

After graduation, Mark worked for Pheasants Forever in Kansas and is currently the Upland Wildlife Ecologist and Farm Bill Specialist for the Wisconsin Department of Natural Resources.

Wilson used acoustic calls collected in several states to characterize distribution/activity of bat species thought to be susceptible to white-nose syndrome.  He also developed a monitoring plan that would be able to detect potential changes in Montana.  His work was in collaboration with Drs. Kathi Irvine (USGS) and Emily Almberg (MFWP) and has been funded by USGS and Montana Fish, Wildlife and Parks.

Wilson is now pursuing his PhD in Statistics at Colorado State University. 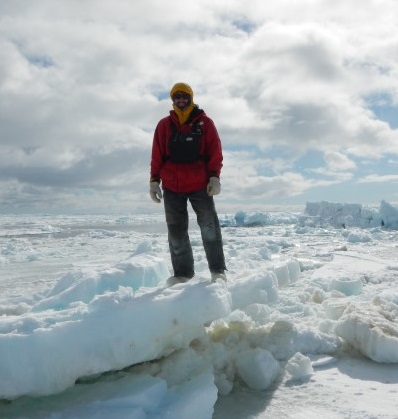 Michael joined the lab in fall 2015, focused on demography of Merriam's turkeys in the northern Black Hills of South Dakota.  Information from Michael's project has informed management and harvest regulations of this species.  We collaborated with Dr. Chad Lehman from SD Game, Fish, and Parks, the agency funding the project.

Michael successfully defended his thesis in November 2018.  After graduating, he worked with biologists from USGS and is now an area biologist for Montana Fish, Wildlife and Parks.

Noah worked with Dan Bachen to develop a key to Montana shrews based on characteristics of dorsal hairs. Similar tools have been developed in the UK. Noah was able to distinguish some of the shrew species in Montana based on hair morphology. Based in this information, hair snares could be used as a low-cost method to sample the distribution of some species of shrews in Montana.

His work was supported by a research grant from the Undergraduate Scholars Program at MSU. 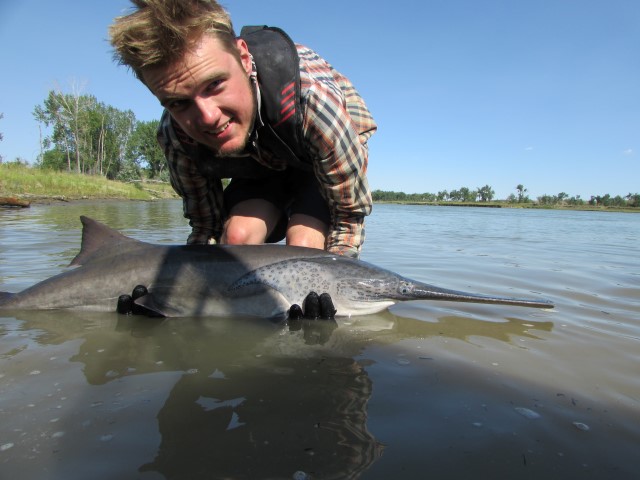 Niall worked on an independent study with me and Dr. Wyatt Cross understanding the role of amphibians in ecosystems. 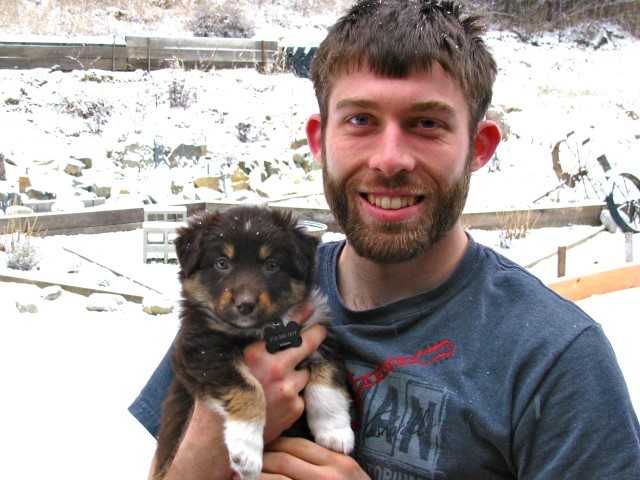 Bryan worked on a collaborative project with the National Park Service and US Geological Service to better understand the factors affecting vulnerability of freshwater wetlands and associated species in the Greater Yellowstone Area.

Bryan's work was funded through the Montana Institute on Ecosystems. 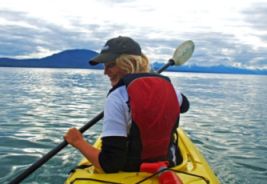 Jayme built a database of previous research regarding herbivory and climate change and the effects on plant and animal communities, mainly focused on the High Plains region of Montana.  Jayme's work was funded through the Montana Institute on Ecosystems. 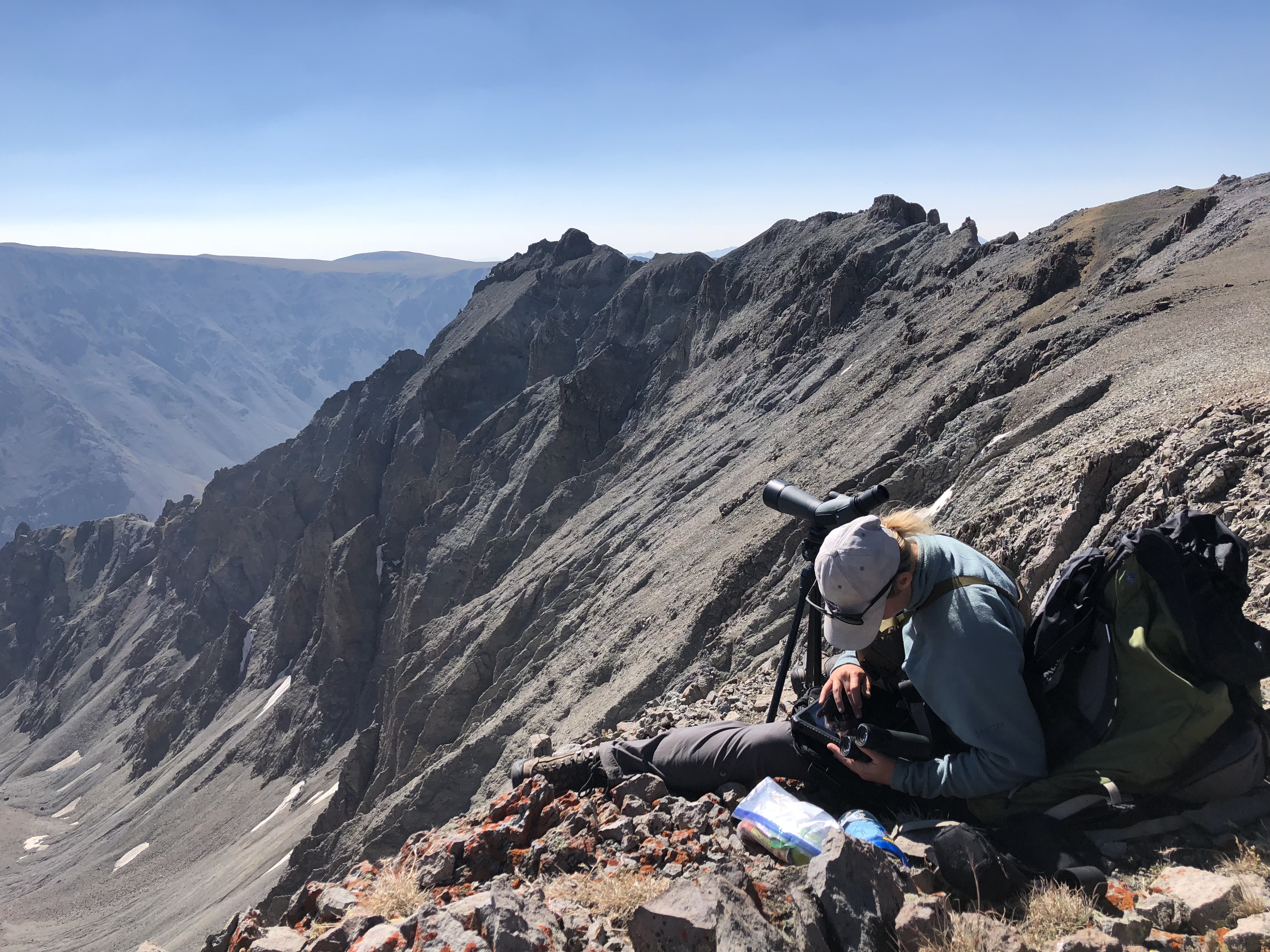 Emma joined the group in January 2019 and helped Shannon Hilty to process acoustic recordings of bats. 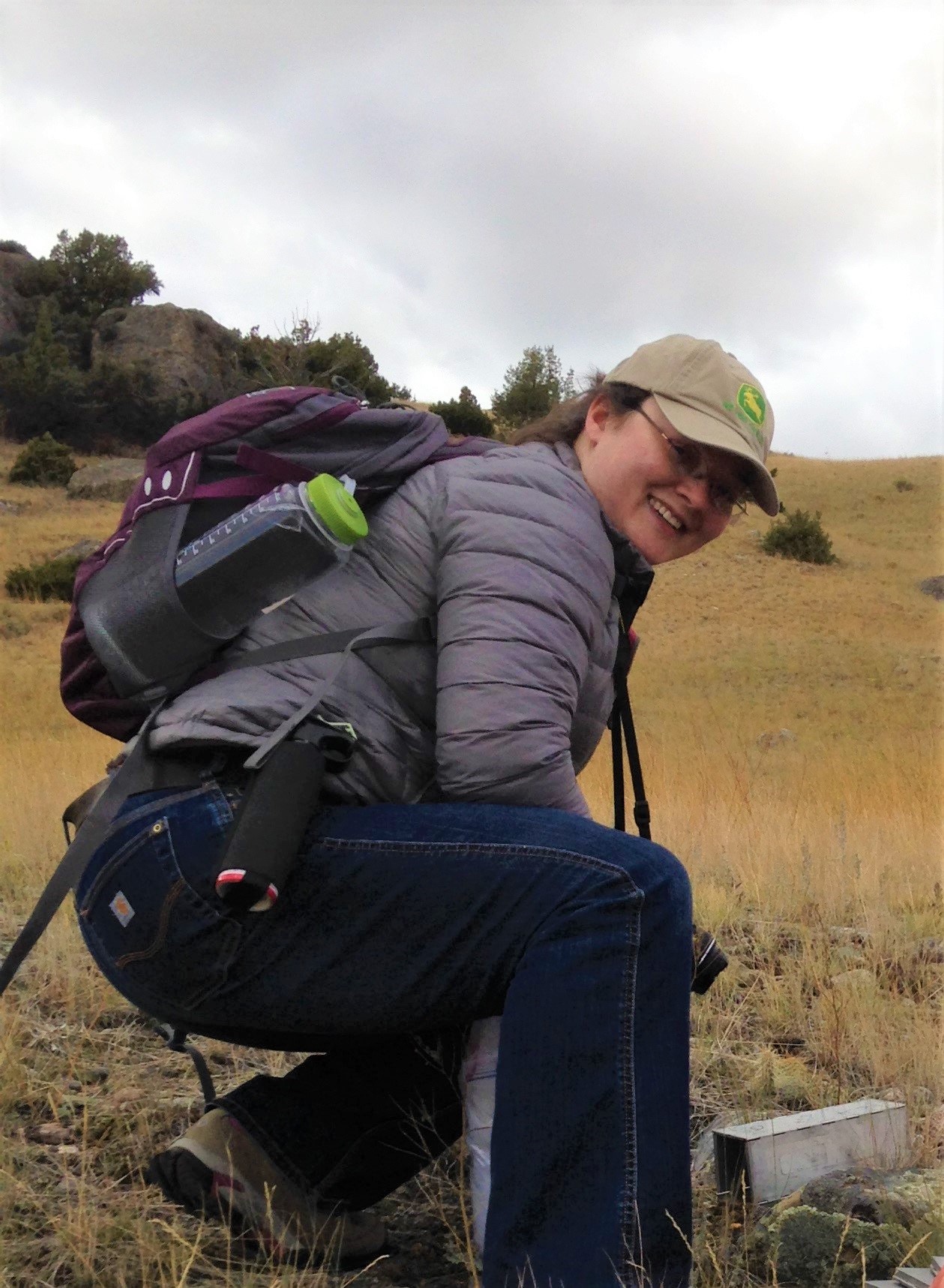 During summer 2017, Megan began an independent research project to better understand predation rates of fish by whitepelicans.We collaborated with Mike Lance (MSU graduate student) and other researchers and biologists and her workwas supported in part by a research grant from the Undergraduate Scholars Program at MSU.  Megan graduated in December 2017! 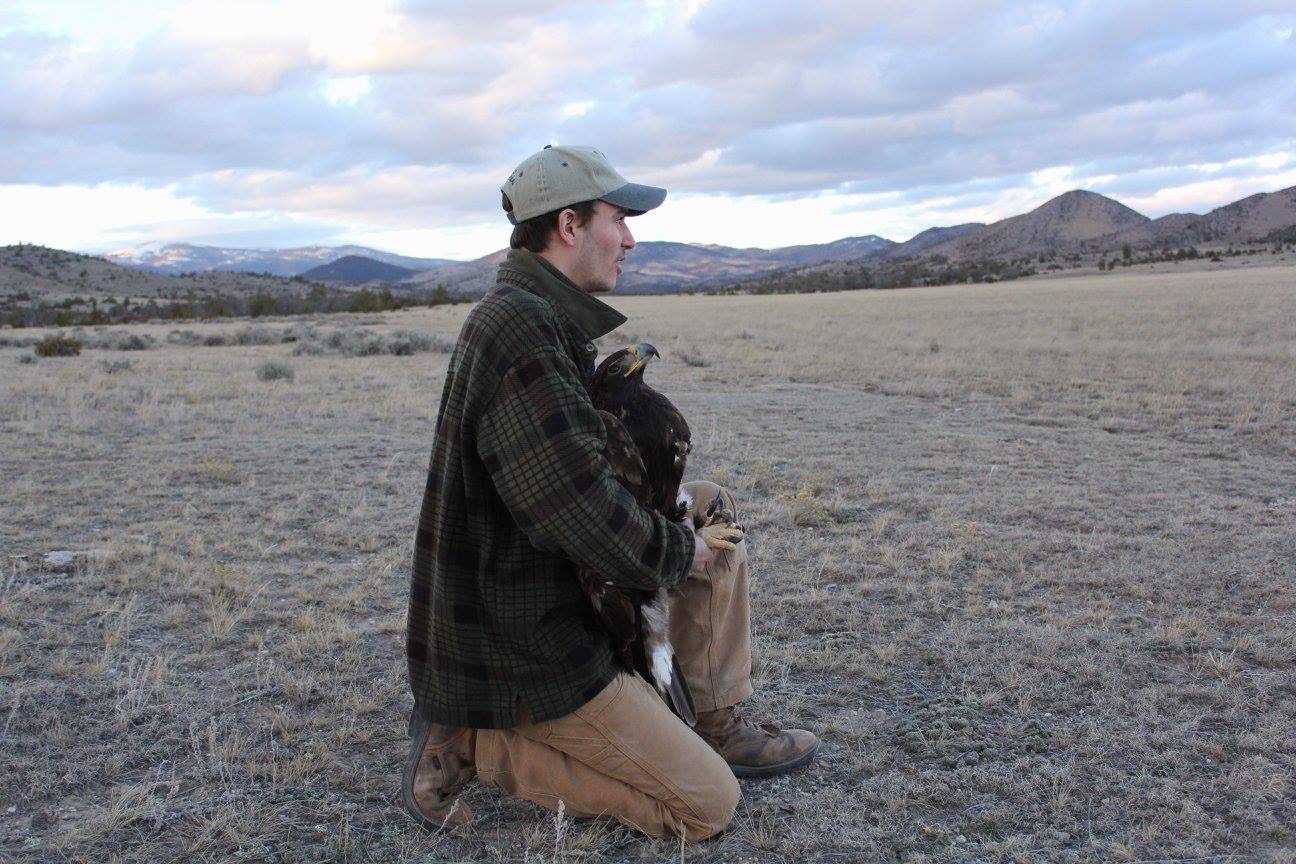 Jacob began his independent research project during summer 2017, working with Michael Yarnall to understand differences in nest site selection between adult and juvenile wild turkeys in the northern Black Hills, SD.  His work was supported by a research grant from the Undergraduate Scholars Program at MSU. He also helped Shannon Hilty with her work on bats during summer 2018.  Jacob graduated in May 2019. 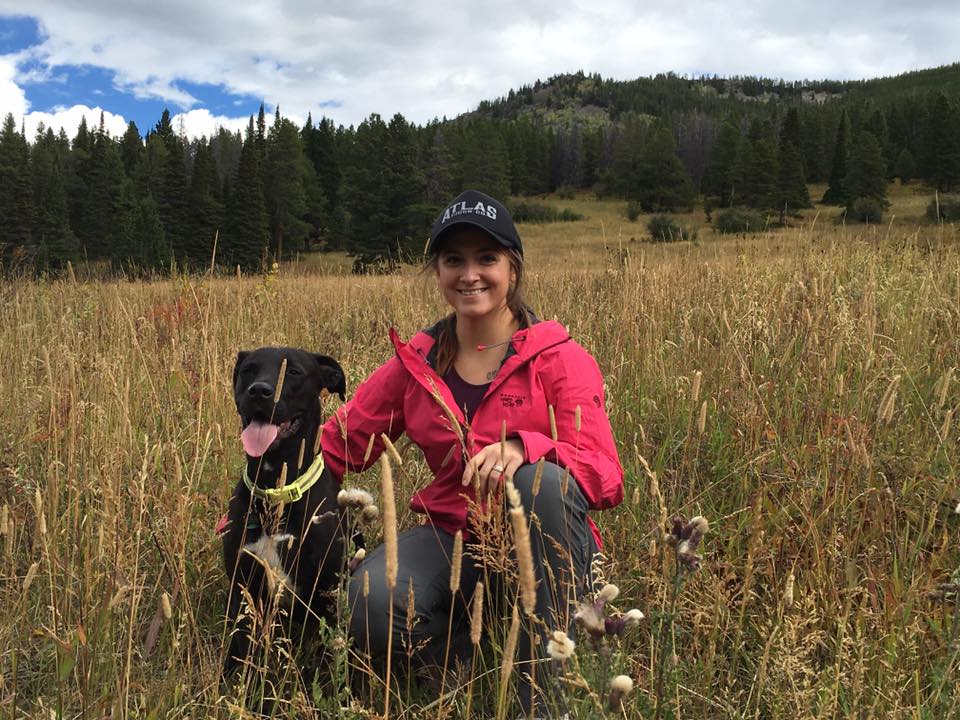 Monique joined the group during summer 2018, teaming up with Shannon Hilty to better understand how forest disturbance caued by mountain pine beetle is affecting activity of bats.  Her work was supported by funds from the Undergraduate Scholars Program. 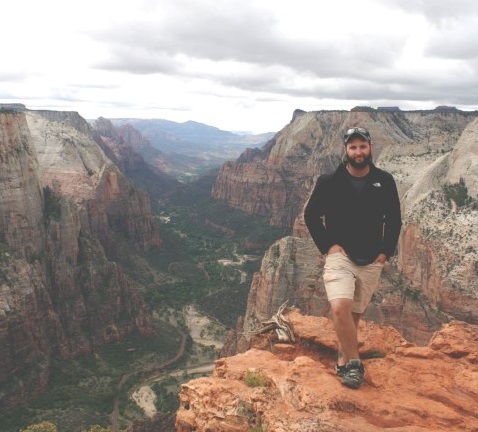 Colter helped us with a research project examining strategies to improve brooding habitat for sage grouse, where we're focused on understanding changes in the arthropod community.  He graduated in December 2016 and is now a Master's student in Land Resournces and Environmental Sciences at MSU. 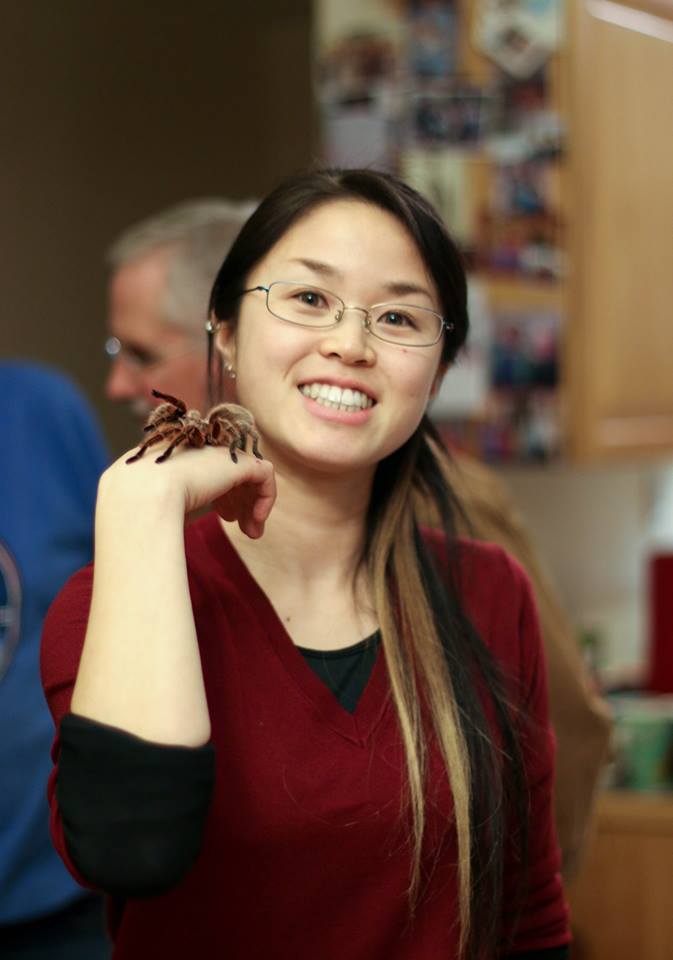 Hitomi joined us in January 2018 and focused on characterizing the trees that bears use for rubbing.  She built on this work during summer 2018, collecting data on random trees, to make inferences about what features bears prefer when they select a tree for rubbing.  For Nate Bowersock's work, we collect hair samples from these trees to estimate population size.  Therefore, better understanding which trees bears use could help us to be more efficient in searching for trees and collecting hair samples.

Hitomi's work in spring and summer 2018 was supported by funds from the Undergraduate Scholars Program.  She graduated from MSU in December 2018. 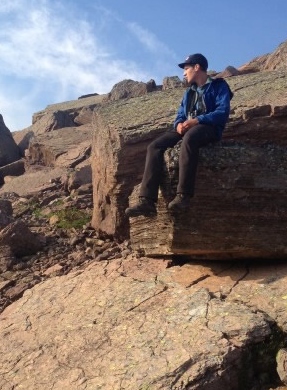 Adam joined the lab after working as a summer field assistant on Ben Turnock's marmot project. Adam worked on an independent research project focused on better understanding the relationship between water sources and occupancy by hoary marmots. He completed this work and graduated in December 2015.

Adam's work was funded by the Undergraduate Scholars Program at MSU. 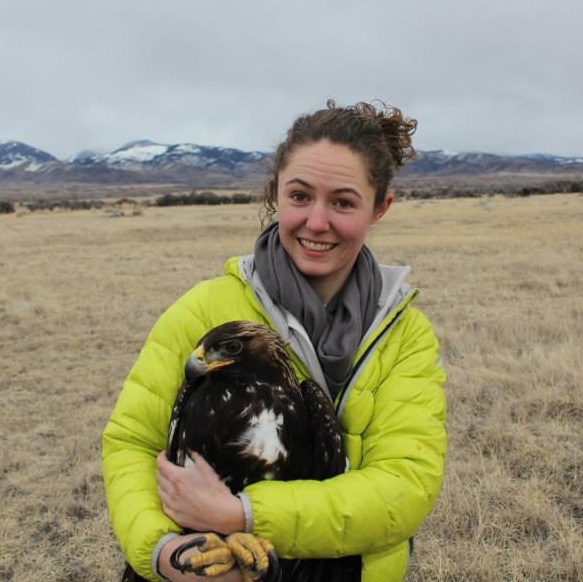 Cheyenne worked in Glacier National Park, in collaboration with Wildlife Biologist Lisa Bate.  Cheyenne surveyed for bats in human structures in the park, to assess the potential for these areas to be used as roost sites. Information from her work will inform park biologists about areas that are high priority for restoration and protection.

Cheyenne was awarded a Jerry O’Neal National Park Service Student Fellowship to support this work.  MSU wrote an article about Cheyenne's work and the Fellowship.  Cheyenne graduated in December 2015. 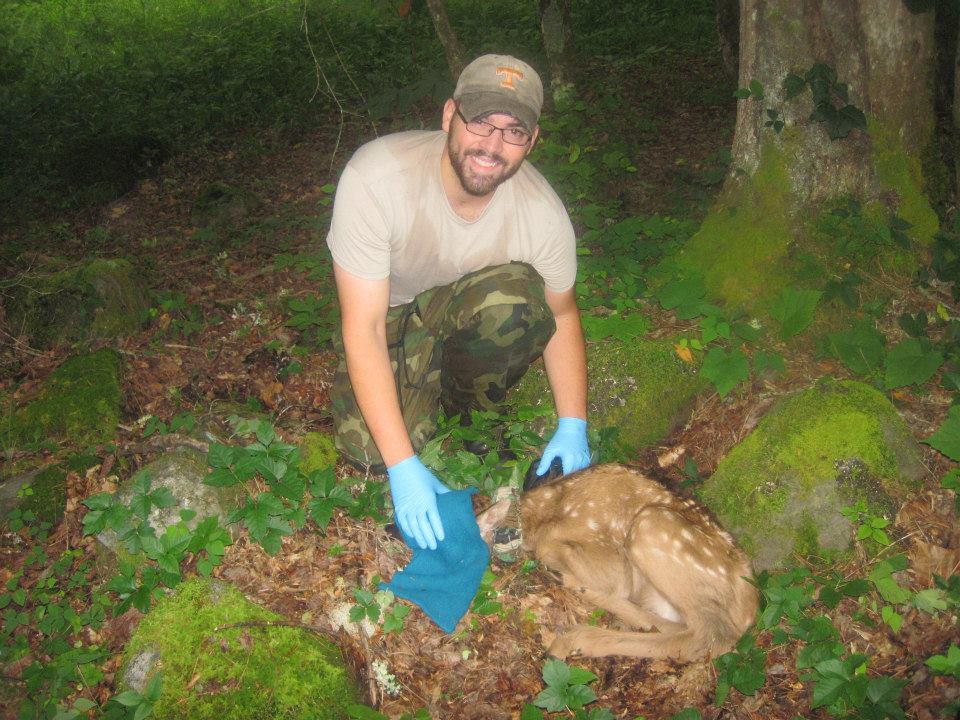 Thomas worked on an independent research project during summer 2016 to understand habitat characteristics important for nest success in Merriam's turkeys in the northern Black Hills, SD, in collaboration with Michael Yarnall.  His work was supported by a research grant from the Undergraduate Scholars Program at MSU. Thomas was given the Wynn Freeman Award in early 2017 and hegraduated in May 2017.  He's now returned to the Litt lab as a graduate student!