Dr. LaMeres joined the Montana State ECE faculty in July of 2006. He received his Ph.D. in electrical engineering from the University of Colorado, Boulder in December of 2005, his MSEE from the University of Colorado, Colorado Springs in May of 2001, and his BSEE from Montana State University, Bozeman in December of 1998. LaMeres teaches and conducts research in the area of digital systems with particular emphasis on exploiting reprogrammable fabrics to deliver more effective computer systems.  LaMeres' team is currently working on a computer technology (RadPC) under funding from NASA that will be heading to the moon in 2022.  LaMeres is also studying how engineering education can be improved using innovative e-learning environments.  Dr. LaMeres was appointed the Director of the Montana Engineering Education Research Center (MEERC) in September of 2016.  Dr. LaMeres was also appointed the Norm Asbjornson College of Engineering Boeing Professor in July of 2018.

LaMeres has published over 100 manuscripts and 6 textbooks in the area of high speed digital systems. LaMeres has also been granted 13 US patents in the area of digital signal propagation. LaMeres is a Senior Member of IEEE and a Registered Professional Engineer in the States of Montana and Colorado.

Prior to coming to MSU, Dr. LaMeres worked as an R&D engineer for Agilent Technologies in Colorado Springs, CO from 1999 to 2006. LaMeres was a hardware design engineer in the Logic Analysis R&D lab. He designed acquisition hardware for the 16910/11/12 and 16950 Logic Analyzer systems in addition to developing a variety of probing solutions.

In 2019 and 2020, LaMeres published five new textbooks on digital logic and embedded systems.  If you wish to purchase one, the best prices are always on Amazon. 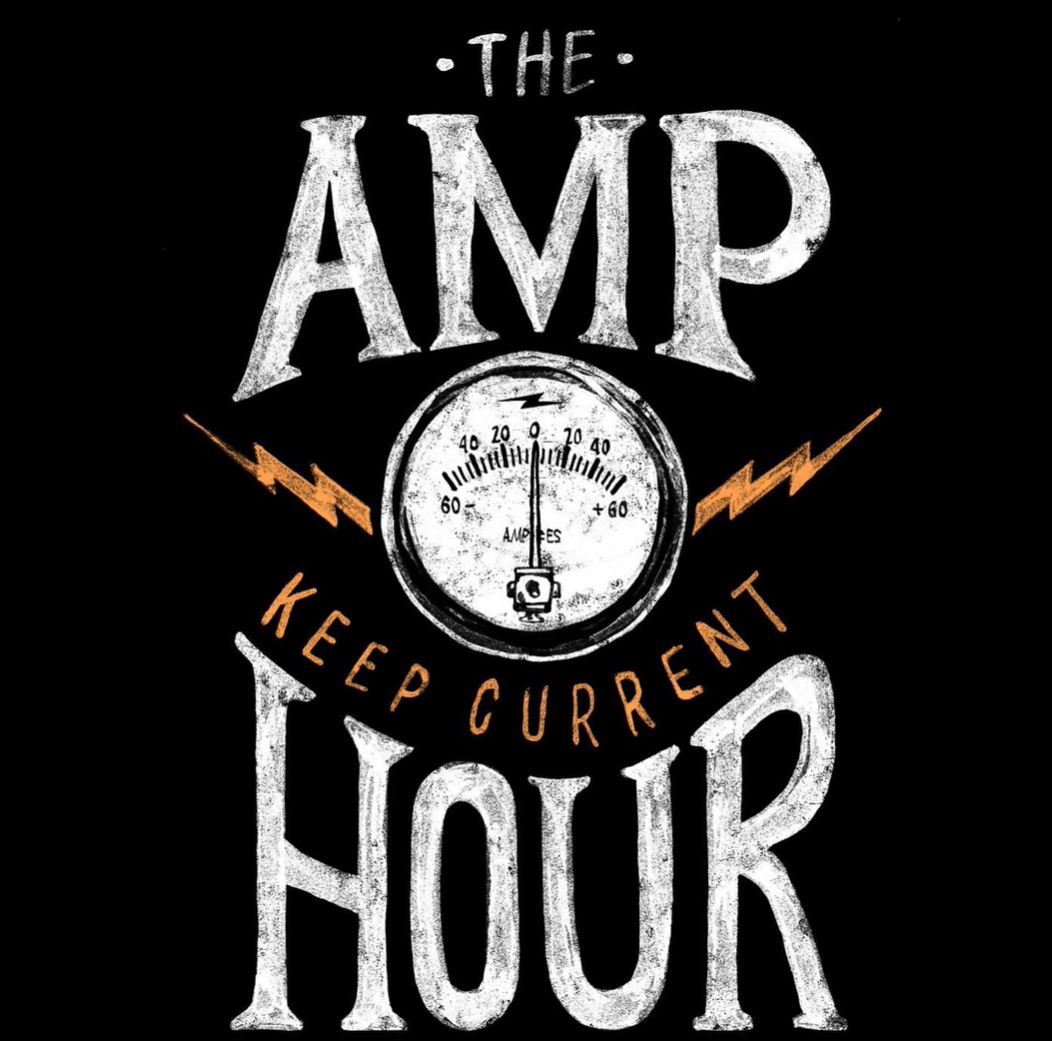 On June 21, 2020, Dr. LaMeres was interveiwed by Chris Gammell from The Amp Hour podcast.  Topics ranged from LaMeres' own engineering education approach to his current aerospace research that is working toward testing a new computer technology on the moon.  Listen to the podcast here and/or read the highlights here. On February 2, 2020, "RadSat-u" was deployed from the International Space Station.  This 12+ month mission will test a further iteration of the radiation tolerant computing technology that Dr. LaMeres has been developing.  Pictured here is RadSat-u being pushed out of the NanoRacks CubeSat Deployer.  Notice the MSU Cat Head on the front of RadSat-u! On January 2, 2020, Dr. LaMeres received the MSU Fox Faculty Award .  This award is given to faculty members that demonstrate excellence across teaching, research, and mentorship.  LaMeres was given the award at the 2020 MSU Spring Convocation.  (MSU News Story, 1/2/20) (Bozeman Chronicle, 2/5/20) On November 2, 2019, the Northrop Grumman NG-12 resupply mission carried "RadSat-u" to the International Space Station.  RadSat-u is the second research satellite that Dr. LaMeres' team has developed to test a new computer technology that can operate in the presense of space radiation.  LaMeres and his students, Chris Major (MSEE, 2020) and Colter Barney (BSEE, 2021), attended the launch at the NASA Wallops Flight Facility in Virginia.  (MSU News Story, 11/15/19)

In July of 2019, Dr. LaMeres was awarded $1.2M to demonstrate his radiation tolerant computer technology on the surface of the moon.  The technology, called RadPC, will be carried onboard a commercial lunar lander as soon as 2021.  The RadPCpayload will also carry radiation sensors to provide characterization data for the lunar surface in preparation for sustained human presence.  (MSU News Story, 7/1/19) (NASA Press Release, 7/1/19) (AP Release, 7/7/19) (NBC Montana Story, 7/8/19) (KBZK Story, 7/8/19) 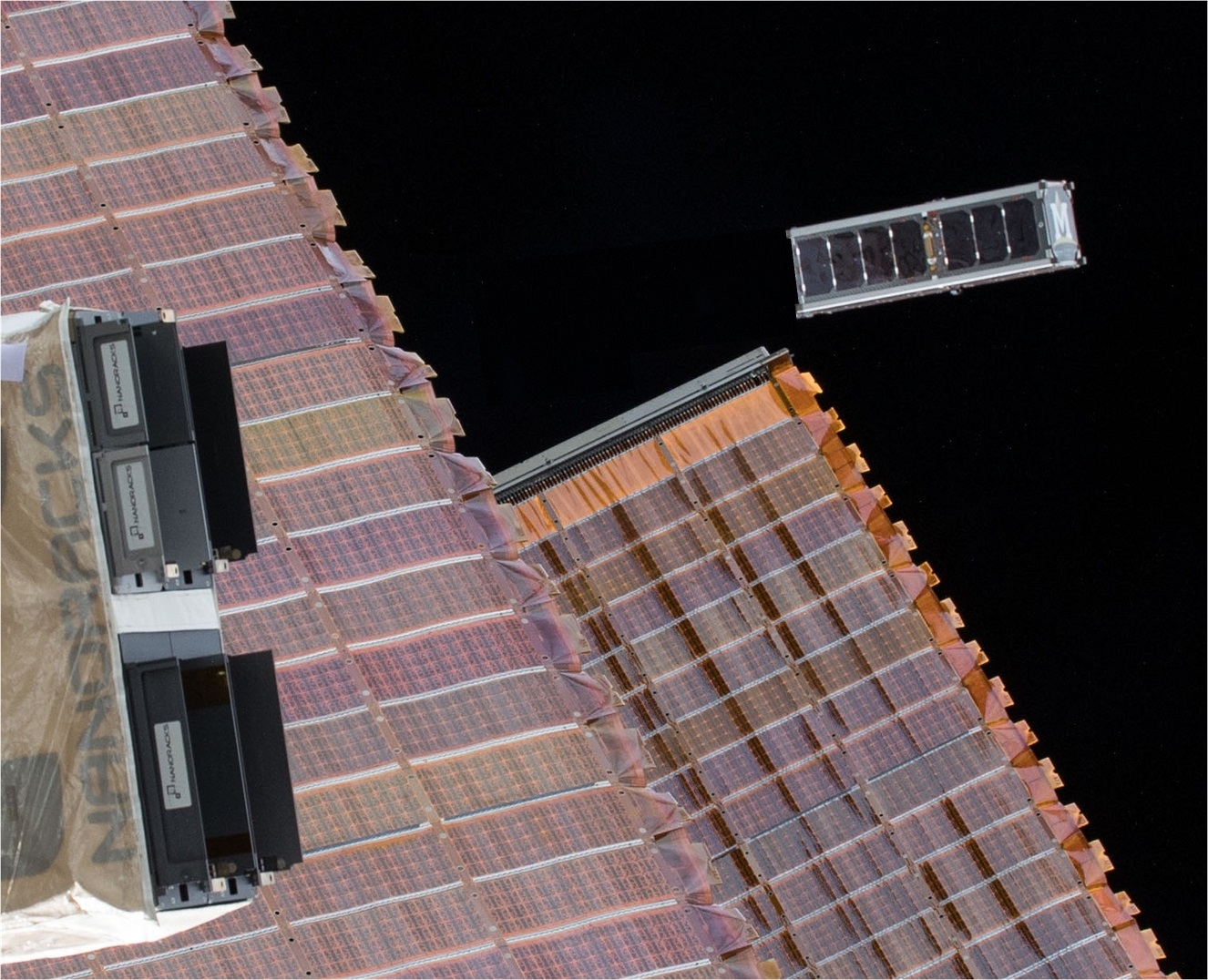 In July of 2018, "RadSat-g" was deployed from the International Space Station.  This 12 month mission will test how the radiation tolerant computing technology that Dr. LaMeres has been developing for over a decade will respond to space radiation.  Pictured here is RadSat-g being pushed out of the NanoRacks CubeSat Deployer.  Notice that MSU logo on the front of RadSat-g! On September 22, 2019, an experiment developed in Dr. LaMeres' lab to generate true random numbers from space radiation was flown on a high altitude out of New Mexico.  The ability to create a true random number can increase the security of communication links by strengthening encryption algorithms.  The project was funded by the NASA Flight Oppertunity Program (FOP).  (MSU News Story, 12/10/18) (Bozeman Chronicle Article, 12/11/18) (KBUL Radio Interview, 12/12/18) 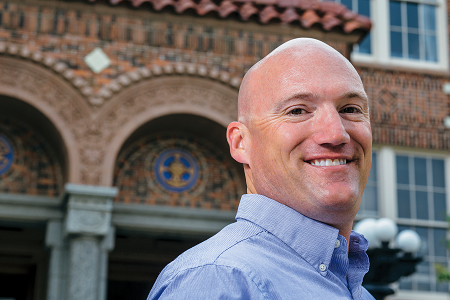 In September of 2018, Dr. LaMeres was named the Norm Asbjornson College of Engineering's Boeing Professor.  This endowed position is responsible for coordinating and overseeing college-wide activities aimed as aligning the skills of engineering graduates to the needs of the workforce. (MSU News Story, 9/14/18)

In June of 2018, LaMeres received the Distinguished Educator Award from the Electrical & Computer Division of the American Society of Engineering Education (ASEE).  This award recognizes significant contribution to ECE education including excellence in teaching, publications of educational research, development of novel curricula, and authoring of textbooks. (MSU News Story, 8/6/18)

In June of 2018, MSU published a record number of papers (17) at the American Society of Engineering Education (ASEE) Annual Conference in Salt Lake City, UT.  Raising the profile of MSU within ASEE is a strategic goal of the Montana Engineering Education Research Center (MEERC), for which Dr. LaMeres serves as director.  The MSU News Service wrote a story about this successful showing. (MSU News Story, 6/24/18) 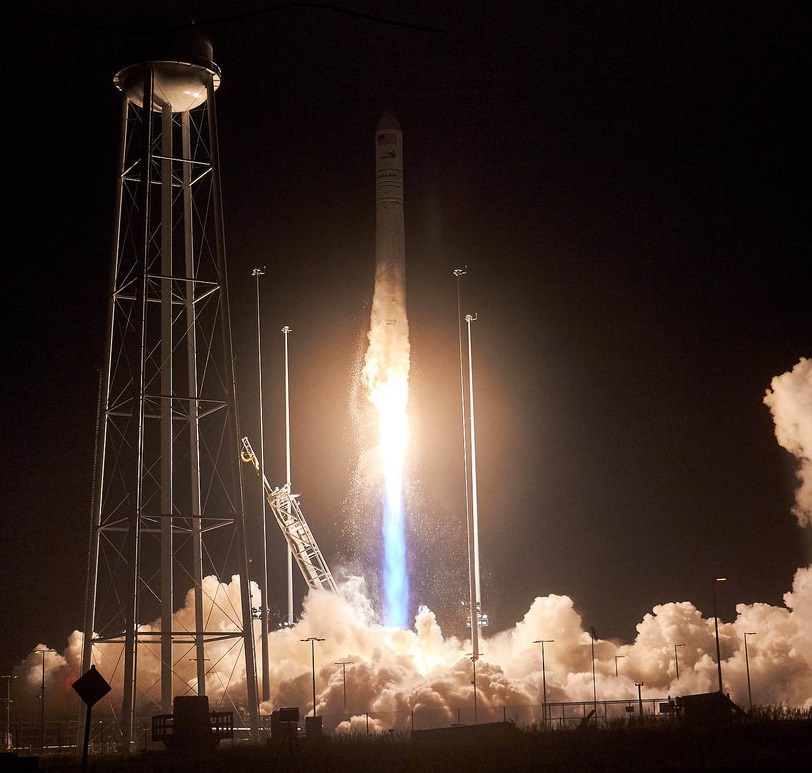 On May 22, 2018, the Orbital ATK OA9 Resupply mission carried "RadSat-g" to the International Space Station.  RadSat-g is a research satellite that Dr. LaMeres' team developed to test a new computer technology that can operate in the presense of space radiation.  LaMeres and his graduate student, Skylar Tamke (MSEE, 2018), attended the launch at the NASA Wallops Flight Facility in Virginia.  (MSU News Story, 5/22/18) In May 2018, MSU Communications produced a video on the 125 year anniversary tribute that Dr. LaMeres' research team conducted.  The tribute consisted of flying the names of the May 2018 graduating class onboard a resesearch satellite (MSU Communications Video, May 21, 2018) 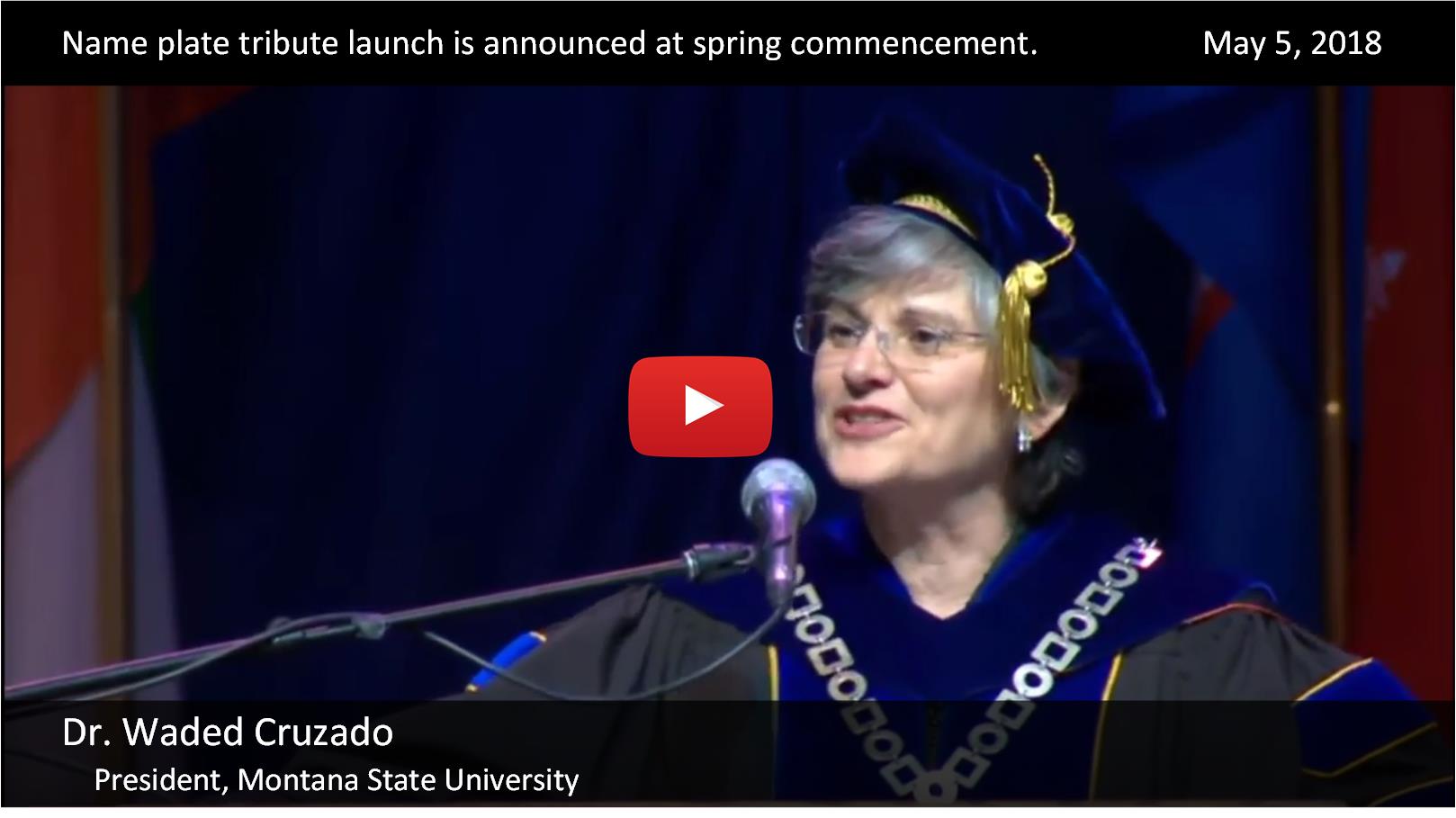 At the Spring 2018 Commencement, MSU President Waded Cruzado announced Dr. LaMeres' tribute to the 125 year anniversiary of the university.  This 2:26 minute video is an excerpt from the commencement live stream when the announcement was made.

In April of 2018 Dr. LaMeres' team announced that they had put together a tribute to the 125th Anniversary of MSU.  Each of the names of the May 2018 graduating class were etched onto thin aluminum plates (2000+ names) and inserted into a research satellite that Dr. LaMeres' team has been working on.  The satellite will be carried to the International Space Station on May 22, 2018, and then put into orbit during the summer.  (MSU News Story, 4/30/18,  Bozeman Chronicle Story, 5/2/18) During the summer of 2018, Dr. LaMeres will be teaching two fully online courses on digital logic.  The courses are EELE 261 - Introduction to Logic Circuits and EELE 367 - Logic Design.  EELE 261 will be offered during the second summer session (6/11/18 - 7/6/128) and EELE 367 will be offered during the third summer session (7/9/18 - 8/2/18).   The laboratory components of these courses will be performed using a portable lab kit that can be checked out from MSU.  Information about these courses can be found here: (Course Offering Overview, EELE 261 Syllabus, EELE 367 Syllabus). 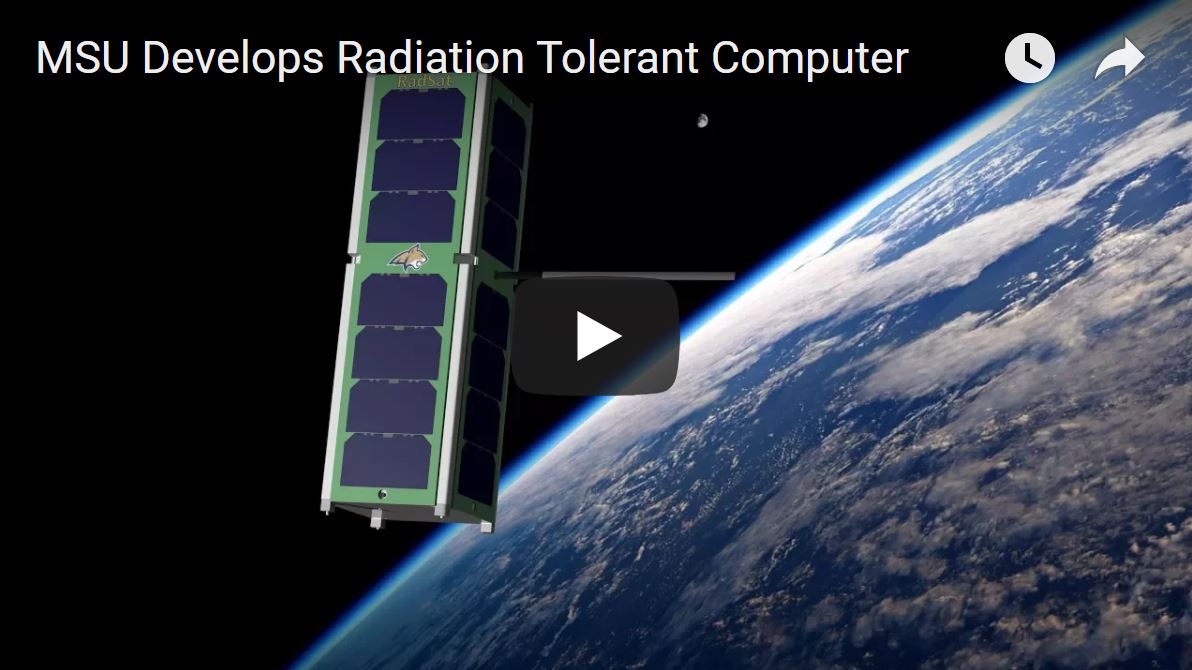 In November of 2017, the MSU Communications team created a research overview video showing the highlights in the development of LaMeres' radiation tolerant computer. (MSU Communication Video, 11/27/17) In November of 2017, LaMeres was part of a team that was awarded $445,000 from the National Science Foundation to improve the spatial skills of middle schoolers.  The project will use the gaming platform MineCraft to implement a curriculum that will ultimately lead to improved performance in math and science courses.  (MSU News Story, 11/6/17) In October of 2017, LaMeres was part of a team that was awarded $500,000 from the National Science Foundation to improve the communication skills of STEM graduate students.  This project will use a variety of unconventional approaches to teaching effective communication including having students create Podcasts, present at Curiosity Cafes, and even being trained by an improvisational actor.  (MSU News Story, 10/9/17) (Link to Program Website) 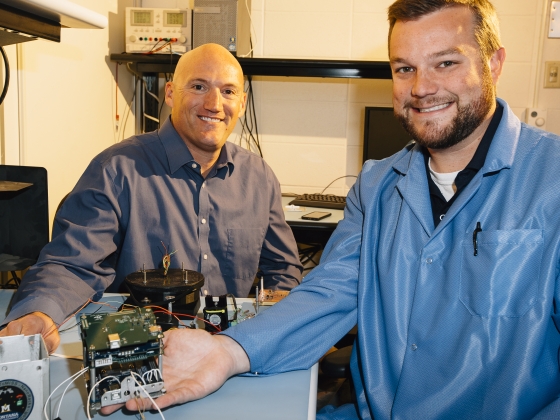 In September of 2017, LaMeres was awarded $100,000 from NASA to deploy and operate a satellite to demonstrate his radiation tolerant computer technology.  The satellite called "RadSat-g", will be carried to the International Space Station on-board a commercial resupply mission and then deployed into orbit using the NanoRacks CubeSat Deployer.  (MSU News Story, 9/13/17) 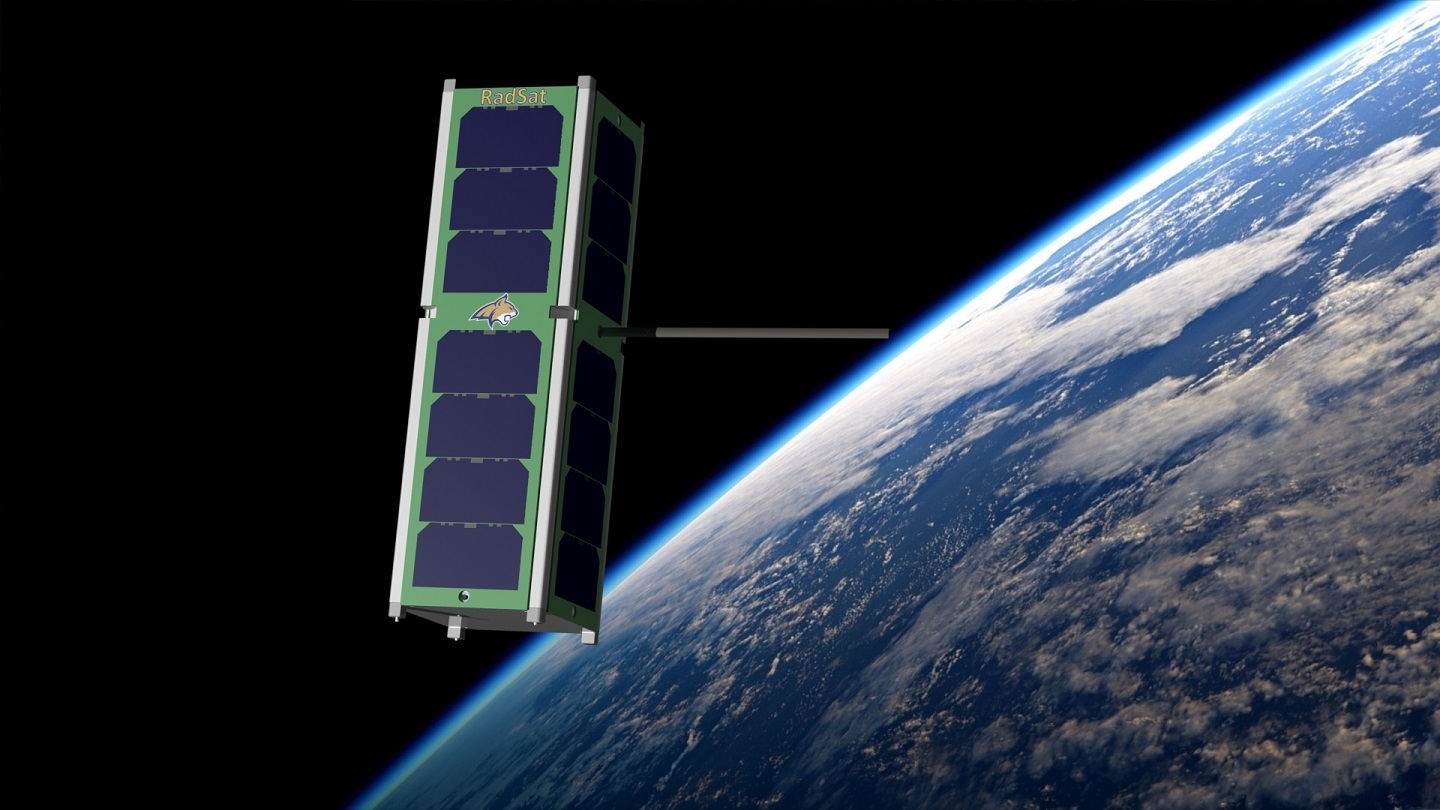 In February of 2017, LaMeres' radiation tolerant computer was selected by NASA's Educational Launch of Nanosatellites (ELaNa) program to fly as an auxiliary payload aboard missions planned to launch in 2018, 2019 and 2020.  The MSU satellite, called "RadSat-u" was ranked #2 out of the 34 payloads selected in the 2017 class.  RadSat-u represents MSU's 7th selection by the NASA ELaNa program  Prior selections where HRBE-E1P, FireBird, FireBird 11, PRINTSat, IT-SPINS, and RadSat-g.  MSU's small satellites are developed by the MSU Space Science & Engineering Lab.   The official NASA Press Release can be read here: (NASA Press Release, 2/17/17). 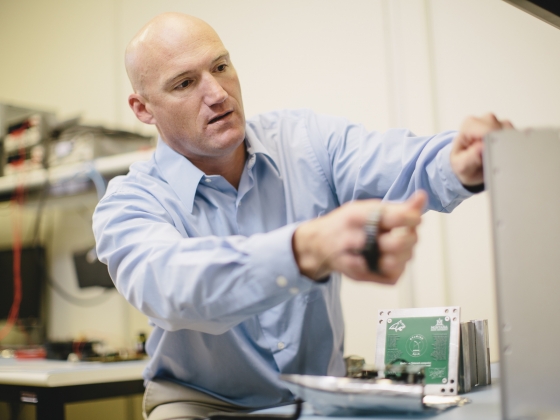 In January of 2017, LaMeres' research team deployed "Artemis" on the International Space Station.  Artemis is a new type of radiation tolerant computer system that will be tested for 12 months on the ISS.  Pictured here is the installation of Artemis.  (MSU News Story, 1/17/17) (Video of Artemis Floating) (ABC FOX Montana News Story).  This project was funded by a $100,000 grant that LaMeres received from NASA in 2014 (MSU News, 6/20/14). In January of 2017, LaMeres was invited to give the Spring Convocation address titled "Transforming Engineering Education". (MSU News Story, 1/4/17) 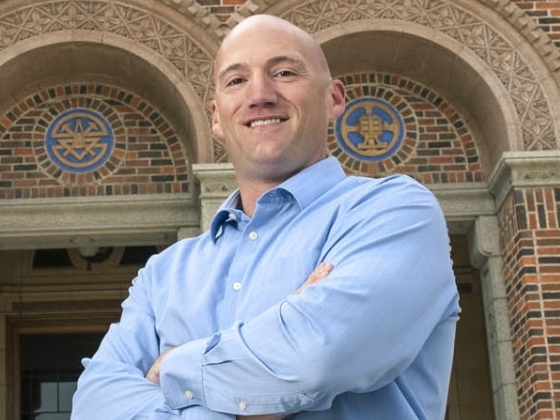 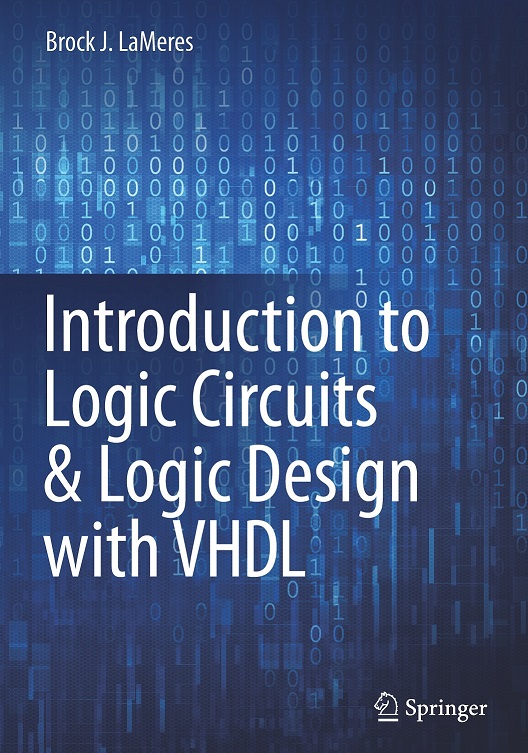 In October of 2016, LaMeres published a new book on digital circuits.  The book is used in EELE 261 and EELE 367 at MSU and has already been adopted by a number of other schools both in Montana and internationally. (Available on Amazon) In September of 2016, the Montana Engineering Education Research Center was approved by the Board of Regents.  LaMeres spearheaded the effort on behalf of the MSU college of engineering (MSU News Story, 9/27/16) (Bozeman Chonicle Story) In July of 2016, LaMeres worked with 2nd graders at Morning Star Elementary School to design the mission logo for his research team's computer demonstration on the International Space Station.  Stickers bearing the logo were sent to the ISS in July and will be returned to the students as keepsakes sometime in 2017.  LaMeres' daughter Kylie was the lead artist on the project (MSU News Story, 7/21/16) (Making of the Logo Video) (ABC FOX Montana News Story) (KBZK News Story) (NBC Montana News Story) In March of 2016, LaMeres' research team launched a version of his computer system called "RadPC" into outer space.  The launch took place at the NASA Wallops Flight Facility in Virginia.  Pictured here is the moment of launch of the Improved Terrior-Orion vehicle. (Launch Video Montage, 3/7/16).  This flight was made possible by a $100,000 grant that LaMeres received from NASA in 2012 (NASA Press Release, 7/2/12). 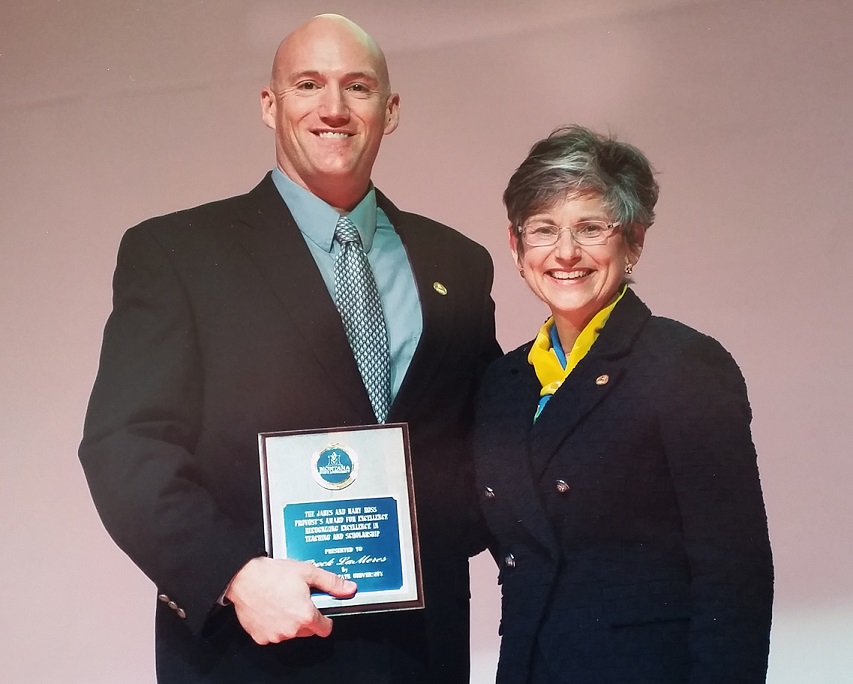