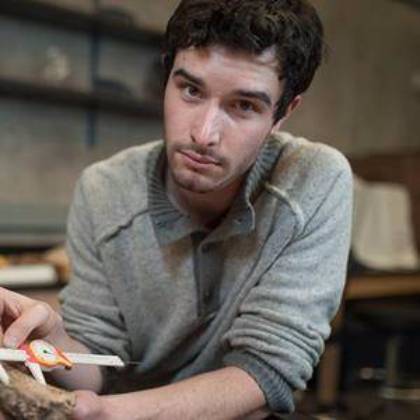 Jacob Gardner, an MSU Earth Sciences student, has been involved in many undergraduate research opportunities.

Jacob Gardner, an Earth Science major from Nipomo, California, has been involved in numerous undergraduate research opportunities to include USP grants, NCUR presentations, and both field and site internships through the Smithsonian in Washington DC!

Jacob worked on the following for his research: Description of a Nearly Complete Bowfin (Family: Amiidae) Fossil from the Eocene Kishenehn Formation, Northwestern Montana: Implications for Biodiversity and Taphonomy.

Several Earth Sciences students will present their undergraduate research and share their internship experiences at the MSU Student Research Celebration. 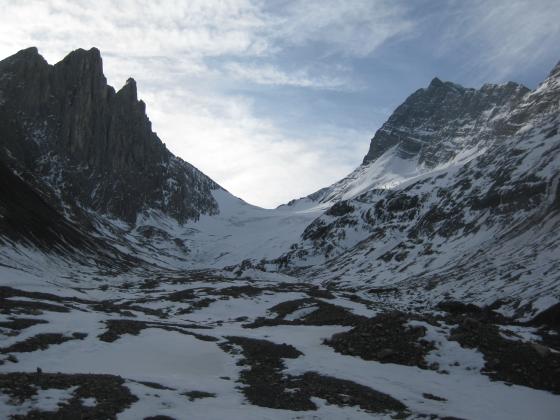 Robertson Glacier near Canmore, Alberta, in 2013. Research by MSU professors and others has found that the grinding action of glacial ice sheets against silicate rocks, when combined with water, releases enough hydrogen gas to sustain methanogenic archaea, or microorganisms that produce methane. As part of the research, MSU professors Mark Skidmore and Eric Boyd collected a rock sample from Robertson Glacier. (Photo courtesy of Mark Skidmore)

For more than a decade, scientists have known microbes can live under glacial ice sheets that are millions of years old, but the mechanism that allows the light- and organic carbon- starved microbes to obtain energy for survival has been a mystery.

Now, research by Montana State University professors and others appearing in the November issue of Nature Geoscience has found that the grinding action of glaciers and ice sheets against silicate rocks, when combined with water, releases enough hydrogen gas to sustain methanogenic archaea, or microorganisms that produce methane.

“This is the first time that this mechanism has been considered in a glaciated environment, and I would say it’s an important mechanism for supporting life in any subsurface system,” Boyd said. “This mechanism likely extends to numerous other wet environments where seismic activity or other physical processes lead to shearing of silicate minerals.”

As part of the research, Skidmore and Boyd collected a rock sample from Robertson Glacier near Canmore, Alberta, and sent the samples to lead study author Jon Telling of the University of Bristol’s School of Geographical Sciences. 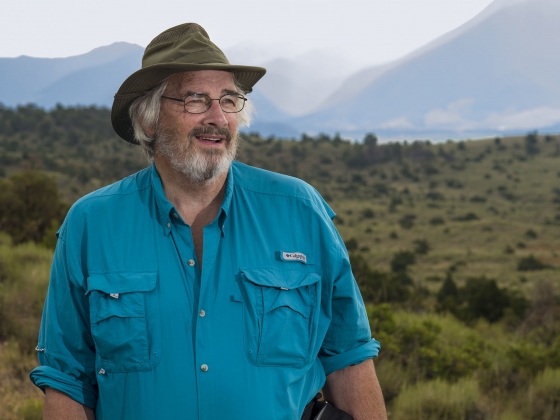 A renowned Montana State University professor who is one of the world’s leading experts in paleontology and who has inspired many to follow him in the field, is retiring.

Although he will be retiring from MSU, Horner says he has no plans to take it easy just yet.

"I can assure you that I'll not be slowing down anytime soon," he said. "I'll be pursuing a number of projects, including helping another museum amass a large dinosaur collection, and finishing a couple more books. I also have a very exciting project that I'm not yet ready to announce."

“During his 33-year tenure as curator of paleontology at the Museum of the Rockies, Jack and his team of staff and graduate students have amassed the largest collection of dinosaur fossils from the United States,” she said. “He opened the science of paleontology to the general public and sparked the imagination of countless aspiring paleontologists.” 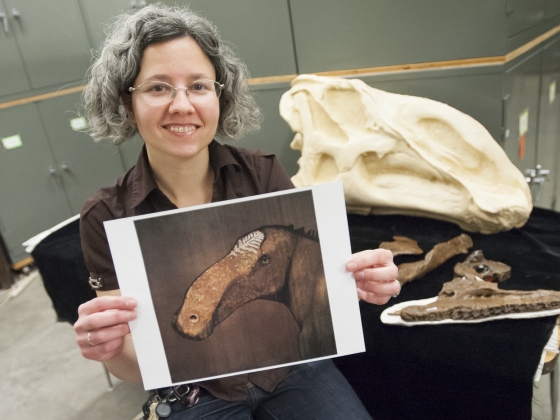 A previously undiscovered dinosaur species, first uncovered and documented by an adjunct professor at Montana State University, showcases an evolutionary transition from an earlier duckbilled species to that group’s descendants, according to a paper published today in the journal PLOS ONE.

The paper was written by that professor, Elizabeth Freedman Fowler, and her mentor, MSU paleontologist Jack Horner, Montana University System Regents Professor and curator of paleontology at MSU’s Museum of the Rockies. Their findings highlight how the new species of duckbilled dinosaur neatly fills a gap that had existed between an ancestral form with no crest and a descendant with a larger crest, providing key insight into the evolution of elaborate display structures in these gigantic extinct herbivores.

“It is really gratifying to see Dr. Freedman Fowler’s work, which is essentially her dissertation, published in PLOS ONE,” Horner said. “It is confirmation that she is an excellent paleontologist, helping further cement MSU’s reputation for offering graduate students a chance to be part of something extraordinary.” 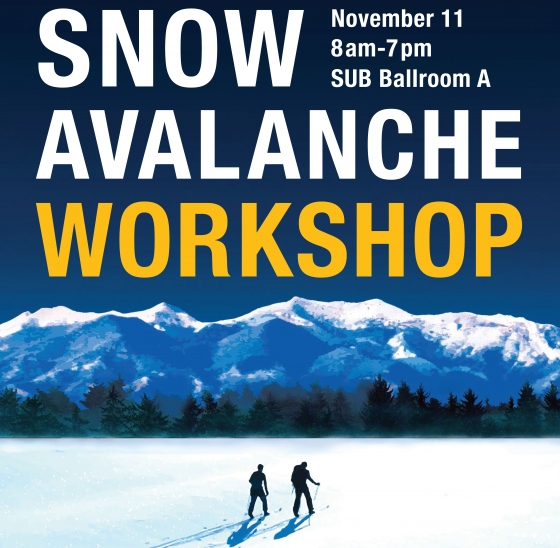 Montana State University will host an all-day snow and avalanche workshop aimed at MSU students, the Bozeman ski and snowmobile community and regional avalanche professionals. The free event – 8 a.m. to 8 p.m. on Wednesday, Nov. 11, in the Strand Union Building’s Ballroom A – will focus on decision-making and evaluating risk on local terrain.

The workshop is sponsored by MSU’s College of Letters and Science, the Department of Earth Sciences and the American Avalanche Association. It will include discussions from longtime guides, avalanche experts and industry leaders. The evening speaker, beginning at 6:30 p.m., will be Graham Charles – a noted polar and mountain explorer speaking of risk and decisions.

Participants will have a chance to get acquainted with some of the best technology available, from beacons, to airbag-deploying backpacks, to smart probes and shovels. MSU is one of the nation’s leading universities in training avalanche and snow-safety professionals. Research posters of university snow and avalanche research from the College of Letters and Science and the College of Engineering will also be on display.

“Our slogan at MSU is ‘Mountains and Minds,’ and we think a snow-safety workshop exemplifies the link between our high caliber academic programs and the attraction of Bozeman’s unique location,” said Jordy Hendrikx, director of the Snow and Avalanche Lab and assistant professor in the Department of Earth Sciences. “We hope the day will be educational, maybe even lifesaving, for those students and Bozeman locals who love to ski in the backcountry.”

MSU's Snow and Avalanche Workshop and Dr. Hendrikx were also featured on Wake Up Montana. 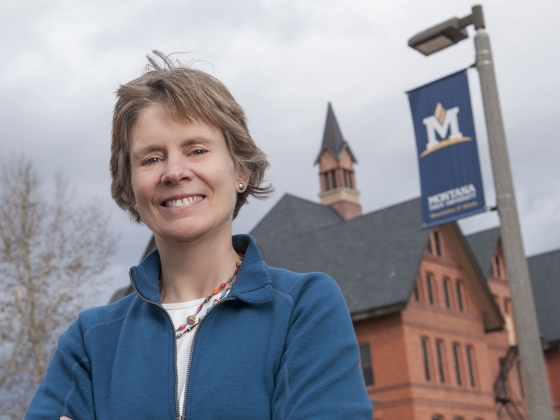 Cathy Whitlock, a professor of Earth Sciences in the College of Letters and Science, was selected for the 2015 Association for Women Geoscientists Professional Excellence Award in the Academic/Research category. The award recognizes exceptional women who have made distinguished contributions in their professions throughout their careers. (MSU photo by Kelly Gorham)

A Montana State University professor has been selected by a national science association as the recipient of its excellence award.

Cathy Whitlock, a professor of Earth Sciences in the College of Letters and Science, was selected for the 2015 Association for Women Geoscientists Professional Excellence Award in the academic/research category. The award recognizes exceptional women who have made distinguished contributions in their professions throughout their careers.

“I am very honored to receive an award that recognizes my research and mentoring contributions in the geosciences,” Whitlock said.

Whitlock has worked with 35 Ph.D. and master’s students throughout her career and about two-thirds of them are women.

“I have had many amazing students over the years, and I have learned as much from them as they have from me,” she said.

Whitlock is nationally and internationally recognized for her scholarly contributions and leadership activities in the field of past climatic and environmental change. She and her students pull sediment cores out of lakes and use them as a storyboard for understanding the past. The pollen and charcoal preserved in the layers of lake sediments offer a rich history of vegetation and fire conditions over thousands of years.  This information is used to study past climate change and its ecological consequences.

By understanding how past climates affected vegetation and fire, scientists can better understand how today’s changing climate will affect current and future ecosystems. 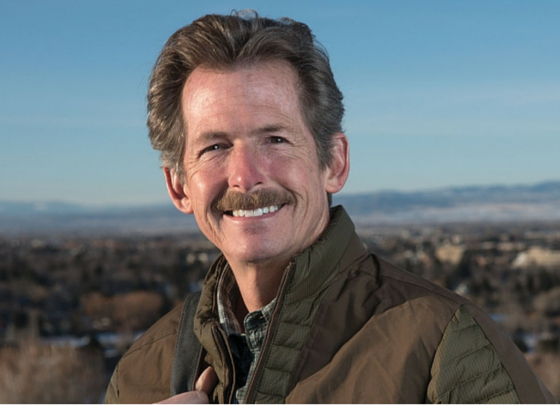 William Wyckoff, a professor of Earth Sciences in the College of Letters and Science, was featured in the Spring 2015 issue of Mountains and Minds.

In the five years necessary to write the book, Wyckoff estimates that he took 17,000 photos and logged thousands of miles along the roads that crisscross some of the most spectacular landscapes in the world.Mountains and Minds asked the award-winning geographer a few questions about changing patterns of settlement, the compelling people and the enduring stories of the region we love.

To learn more about William Wyckoff and his writings, visit westernfieldguide.com.

MSU expert on wildfires will use Fulbright to conduct research, teach in Chile 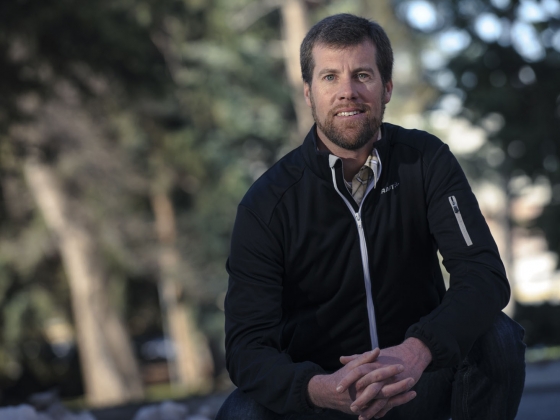 Dave McWethy, an MSU expert on wildfires, has received a Fulbright scholar grant. He will use it to conduct research and teach in Chile. (MSU photo by Kelly Gorham).

A Montana State University scientist who studies wildfires around the world now has a Fulbright scholar grant to research fires in central Chile.

Dave McWethy will use his grant both to conduct research and teach at the University of Concepción. It’s the same South American university where MSU graduate Brent Zundel is currently investigating water issues with a Fulbright research grant. Concepción is Chile’s second largest city and located near the center of the country.

“It’s an important time to look at wildfires,” said McWethy, assistant research professor in MSU’s Department of Earth Sciences in the College of Letters and Science. “There have been some really large fires happening right now that are threatening communities and rare forests throughout central Chile.”

McWethy and his family will move to Chile in December, overlapping about a week with Zundel’s nine-month stay. McWethy will start his fieldwork in January, focusing on Araucaria araucana forests and wild fires. On March 1, the beginning of the university’s fall semester, he will start teaching a seminar on global fire ecology and a field course on reconstructing historical conditions. His Fulbright ends June 30.