Roads and trails, and the people and vehicles that travel along them, have long been implicated in the spread of weeds. The September 2013 Weed Post highlighted research that quantified relationships among vehicles, people, and weed seed dispersal. This post provides more detail on studies conducted at Montana State University that measured the number of seeds picked up by vehicles, the distance seeds traveled on vehicles before they fell off, and the value of washing vehicles to reduce weed spread.

Seeds Picked up by Vehicles 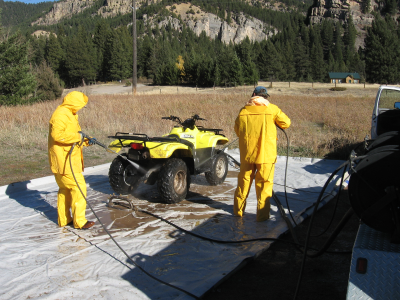 In this study, off-highway vehicles (OHVs) were driven a certain distance either on- or off-trail in spring and fall and then washed to collect seed material. Seeds collected during washing were grown in the greenhouse, identified to species, and counted. OHVs collected many seeds in both seasons on- and off-trail. More seeds were collected in fall than spring, and many more seeds were collected off-trail than on-trail. When driving off-trail, OHVs picked up 5,500 seeds per mile in the fall, and even OHVs driven on-trail collected 394 seeds per mile.

Distance Seeds Can Travel on a Vehicle 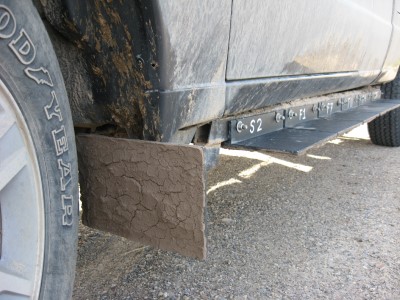 For this study, metal plates containing mud and a known number of seeds (non-weedy) were attached to bumpers, undersides, and wheel wells of a pickup truck. The truck was driven 160 miles on either paved or unpaved roads and under both dry and wet conditions. Metal plates were detached at different distances, and mud remaining on plates was removed and sieved to collect seeds. Under dry conditions, most seeds (99% on paved, 96% on unpaved) stayed attached to the truck after travelling 160 miles, allowing for very long-distance dispersal of seeds. Under wet conditions, seeds fell off much sooner, especially on paved roads where no seeds were retained in the wheel wells after travelling 80 miles. 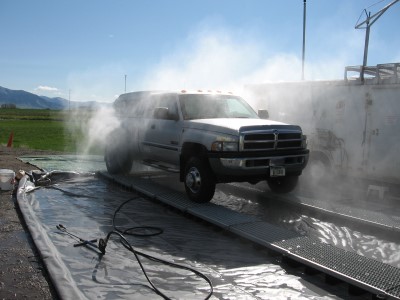 In a series of studies, a known amount of soil was sprayed onto the underside of a clean pickup truck and allowed to dry. The truck was then washed for different durations of time, numbers of consecutive washes, and types of wash units. At the end of each wash, soil removed from the truck during washing was collected, dried, and weighed. Vehicles washed for 6 minutes in a single wash or two to three consecutive washes were the cleanest, removing ~80% of the soil.  However, if time is limited, a 3-minute wash removed ~ 60% of the soil, much more than the often used 1.5-minute wash. All commercial wash units, regardless of water pressure or water use, performed similarly.

Read more about these studies, which were conducted by Dr. Lisa Rew and her students, in the MSU Extension publications Weed Seed Dispersal by Vehicles and Washing Vehicles to Prevent Weed Seed Dispersal. You can also read the journal article Hitching a ride: Seed accrual rates on different types of vehicles by Rew et al. (2018).

This weed post is also available as a printable PDF (711KB).