The importance of freshwater shrimps in tropical stream ecosystems 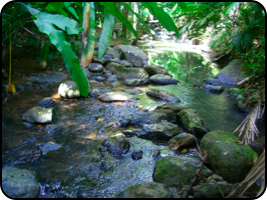 Many tropical stream animals are diadromous, meaning they spend variable portions of their life cycle in both freshwater and saltwater. This life history attribute necessitates some degree of migratory behavior. In Puerto Rico (and many other tropical island systems), fishes and shrimps dominate community biomass, but their relative biomass is highly variable among stream systems. Why is this? Interestingly, landscape topography plays a large role in determining the structure of stream communities. In some streams, large waterfalls prevent the upstream migration of predatory fishes, but pose no problem for upstream movement of shrimps. Consequently, some headwater streams have extremely high biomass of shrimps and very few (often none) predatory fishes. Other streams that lack major waterfalls contain moderate numbers of predatory fishes (e.g., American eels, Mountain Mullet) and very few shrimps because of strong predation pressure. This contrast in foodweb structure among nearby headwater streams provides an ideal situation for examining the role of consumers in ecosystem-scale dynamics.

My research focused on the following topics: