February 12, 2020, 12:00-1:30 - Dr. Kristin Intemann, Professor in Department of History & Philosophy "Calling the B.S.: from fake news to vaccines; how do we know what to believe" (includes socializing after presentation) 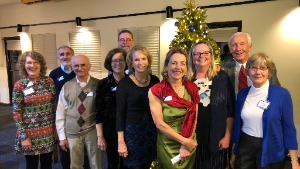 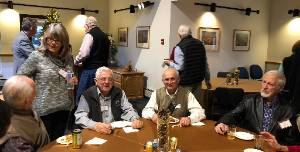 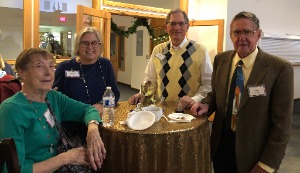 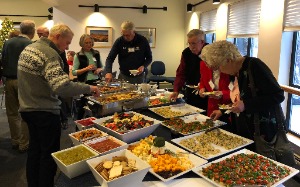 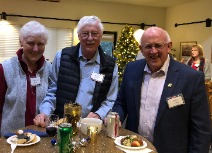 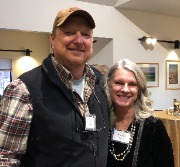 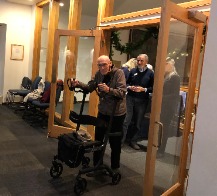 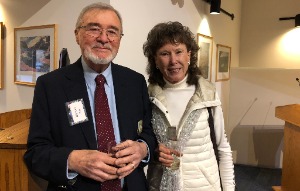 November 5, Dr. Bridget Kevane, Professor & LaTrelle Scherffius, Instructor in Department of Modern Languages & Literature along with the several students who went to the Souther Border. "Finding the Truth About the Southern Border"

This year, receiving the Blue & Gold Award, the highest award recognition from MSU, honors individuals who have rendered great lifetime service or who have brought national or international distinction to MSU achieving prominence in profession, family, country, world, university, philanthropy or humanity.

Receiving Distinguished Faculty, recognizing a faculty member for having distinguished herself or himself by meritorious service to his or her college in areas of teaching, research, leadership, achievement, mentoring, and outreach.

Receiving Honorary Alumni Award recognizin a non-alumnus(a) whose extraordinary service has advanced the university and made significant and lasting contributions to the campus. The honoree’s professional, personal, civic and philanthropic pursuits must reflect the high standards and values associated with Montana State University.

Receiving the Alumni Achievement Award, the criteria for which include recognizing an MSU graduate who has (1) distinguished professional achievement; (2) an outstanding record of service to the community; and/or (3) exemplary service to Montana State University.

And receiving the MSU Retiree Volunteer of the Year is Pat Simmons.  This award is presented by the MSU Alumni Foundation and recognizes the selfless work of volunteers and leaders of volunteer boards and councils.

Tuesday, May 15, 2018. Annual Dinner. Presentation by Dr. Robert Rydell, MSU Professor of History & Philosophy, Director of the American Studies Program, Co-Director of the Center for Western Lands and Peoples.

September 19, 2017.  Brown Bag Seminar Series.   Molly Arrandale , MSU Library Program Manager, provided a talk on the "Acoustic Atlas", a curated collection in the MSU library of over 2500 recordings of species and environments from throughout the Western United States.

April 18, 2017.  Lunch and Learn Presentation.   HEALTH INSURANCE -- Doug Young, a 2010 retiree and a member of the MSU Retiree Association facilitated a discussion with a Medicare navigator and an ACA Marketplace specialist on the various health insurance options available to retirees.

March 23, 2017.   The MSU Retiree Association and the MSU Alumni Foundation hosted a Lunch and Learn Presentation.  Leon Costello, the MSU Director of Athletics, discussed Bobcat Athletics, including student-athlete highlights and a vision for the future.

January 11, 2017.  New Year Social, held at the Helen E. Copeland Gallery,  to celebrate the new year and learn about upcoming events in 2017.

November 15, 2016. The MSU Retiree Association and the MSU Alumni Foundation hosted  a Lunch and Learn presentation entitled: MUS Health Care Re-enrollment--A Retiree's Perspective.  This presentation covered the complexities and various offerings of Medicare coverage available in the public marketplace.  The speaker was Peggy Tombre from the State Health Insurance Program (SHIP) and there was a panel that included three retired professors who have served on the MUS Interunits Benefits Committee.  The program was dedicated to helping retirees with the public Medicare marketplace, neither MUS programs nor MUS Choices wiere discussed.

October 18,2016.  The MSU Retiree Association and the MSU Alumni Foundation hosted a Lunch and Learn presentation by Bob Lashaway, retired Vice President of University Services, on "Major Changes to the Physical Environment of MSU Over the Past 25 Years"

September 27, 2016.  The MSU Retiree Association and the MSU Alumni Foundation presented Lunch and Learn:  "Right Brain/Left Brain Language".   Dr. John Miller and Dr. Jerry Coffey presented this seminar on the basic physiological structure of the brain and how to maintain brain health as one ages .

May 11, 2015.  Annual Retired Faculty and Staff Dinner, sponsored by the MSU Alumni Foundation.  The keynote presentation was by MSU professor Seth Walk on "The Human Microbiome; Recent Discoveries".

April 6, 2016.  Don Mathre, Professor Emeritus of Plant Pathology and active member of the Gallatin Gardeners Club, gave a presentation on "Gardening in the Gallatin Valley, what things you need to do, and varieties you need to plant to be successful".

April 1, 2015.  Retirees were invited to a talk at the American Computer and Robotics Museum.  George  Keremedjiev, Director of the museum gave a talk on, and a tour of, their upcoming exhibit, Hacking Hitler’s Code.

May 18, 2015.  Annual Retired Faculty and Staff Dinner, sponsored by the MSU Alumni Association. The keynote presentation was provided by Dede Taylor, retired MSU Professor and art historian.  Her talk was entitled "Woman in Gold: Gustav Klimt's painting in the context of fin de siecle Vienna".

September 25, 2014. Recent Retiree Reception. Retirees who had left MSU service in the last two years were honored by the Association of Retired Faculty. Entertainment was provided by Distinguished University Professor Greg Keeler, a recent retiree.

May 28, 2014. Annual Meeting and Luncheon. Discussion included a proposal for an Emeritus College and a preview of the annual report.

November 20, 2013. Brown Bag Luncheon Series.   Dr. Gerald Wheeler, former faculty member in Physics and currently on the science advisory boards of national organizations evaluating science and math education, spoke on  “Testing our Kids:  An International Comparison of USA Student Performance in Science and Mathematics on a State by State Basis".

April 3, 2013. Luncheon Series. Connie Welsh, Director of Benefits for the Montana University System, discussed upcoming changes for 2013-2014 in the benefits program for retirees.

March 20, 2013. Brown Bag Luncheon Series. Dr. David Arnon, a local  physician, spoke about the health care situation in American and where we are or are not headed.

January 16, 2013. Brown Bag Luncheon Series. The speaker was MSU's most recent Rhodes scholar,Joe Thiel, who talked about how one becomes a Rhodes scholar.

October 10, 2012. Brown Bag Luncheon Series. The speaker was Brad Balkin from the Denver office of TIAA-CREF who discussed retirement issues and financing retirement.

September 26, 2012. Brown Bag Luncheon Series. A panel discussion was held which discussed the rights and privileges of MSU retirees as well as the potential for developing phased retirement plans for MSU.

June 20, 2012. Brown Bag Luncheon Series. Dennis Defa, Chief of Human Resources at MSUdiscussed the role of his office regarding retirees and potential retirees.

April 18, 2012, Brown Bag Luncheon Series. Tom Wessel, Emeritus Professor of History, spoke on the subject of "What Historical Consulting Can Do For You".  Dr. Wessel was a consultant to the U.S. Dept of Justice on the settling of the recent Indian claims suit.

April 2 2012. Capstone Lecture Series. Denbigh Starkey, Emeritus Professor of Computer Science, presented a lecture entitled "The Life and Intelligence of Alan Turing". The lecture honored the 100th anniversary of the birth of Alan Turing, the intellectual leader of the Ultra project at Bletchley Park in World War II which broke the German Enigma code and developed the first general purpose electronic computer. ARF co-sponsored the lecture with the Computer Science Department.

February 16, 2012. Capstone Lecture Series. Cathy Conover, retired VP of Communications and Public Affairs, presented "Hands-on, Active Learning: Six sessions lobbying in the Montana Legislature." Cathy was the chief spokesperson for MSU during many legislative sessions and her lecture provided insights from her unique perspective on how the legislature works and how the university system presents itself to the legislature.

October 19, 2011. Brown Bag Luncheon Series. The guest speaker was Richard Sabo, MD, retired surgeon and amateur astronomer. He spoke on "Evolution of an Amateur Astronomer", describing how his personal interests in astronomy evolved and reviewing his current work with variable stars.

May 25, 2011. Retired Faculty Dinner at the MSU Foundation and Alumni Center. Sponsored by the MSU Alumni Association.

May 3, 2011. Help Session on 2011-2012 health insurance options available to retirees through the Montana University System CHOICES program. Ken Hapner, member of the InterUnits Benefits Committee, and other knowledgeable ARF members, along with several individuals from MSU Human Resources were available to answer questions about the choices of available insurance plans.

April 6, 2011. Capstone Concert as part of the Capstone Lecture Series. Co-sponsored by the Department of Music. Alan Leech, retiring professor of music at MSU gave a bassoon and saxophone concert, accompanied by Karen Leech, also retiring from the MSU music faculty.

March 23, 2011. Brown Bag Luncheon Series. The speaker was Connie Welsh, Director of the Interunits Benefits Committee of the Montana University System who discussed changes in the MUS benefits program (health insurance) for retirees.

February 16, 2011. Ken Hapner, retiree representative on the Inter Units Benefits Committee of the MUS, presented updates on the potential changes in health insurance plans for retirees for next year.

May 19, 2010. Retired Faculty Dinner at the MSU Foundation and Alumni Center. Sponsored by the MSU Alumni Association.

April 28, 2010. No host luncheon in the Strand Union Building.  Dr. Tom McCoy, Vice President for Research, Creativity, and Technology Transfer, provided an update on how retirees can be involved in research programs, as well as discussing current items of interest involving his office.

April 15, 2010. Dr. Pierce Mullen, Professor Emeritus of History presented his Capstone Lecture in the Byker Auditorium of the Chemistry and Biochemistry Building The title of the lecture was "How I Came to Teach, But Stayed to Learn".   According to Dr. Mullen, "This lecture is aimed at reviewing changes in my chosen discipline and in me.  Colleagues and students taught me far more than I could ever teach them and this is that story".

March 11, 2010. No host luncheon in the Strand Union Building. Lunch was followed by the annual business meeting to elect officers and to discuss programs for the coming year.

February 24, 2010. Dr. Gary Strobel presented his Capstone Lecture in the Plant Bioscience Building.  The lecture was titled "The excitement and fascination of biodiscovery". Dr. Strobel is well known internationally and on campus for his many discoveries of fascinating fungi associated with plants from all over the world.

January 20, 2010. No host luncheon, Strand Union Building. Ken Hapner, ARF member and the retiree representative to the Inter Units Benefit Committee (IUBC), the University-wide benefits committee, was the speaker.  He discussed the new MAPPS program (Medicare Advantage Program) that was recently instituted.  He also discussed the new UrX program, the pharmacy program that was scheduled to begin on July 1, 2010.

December 16, 2009. No host luncheon in the Strand Union Building. Dr. Christiana Stoddard, Assistant Professor in the Department of Agricultural Economics and Economics, gave a talk on "Key Issues in Health Care Reform".

November 17, 2009. No host luncheon in the Strand Union Building. Norm Eggert, Retired Professor of Mathematics, spoke about "Volunteer Opportunities in the Community".

October 21, 2009. No-host luncheon at the Strand Union Building. Anne Anderson, TIAA-CREF representative for Montana, spoke on "Withdrawing funds from investment vehicles during retirement. When and how much should you withdraw, including funds in 403bs, Roth and conventional IRAs". Comments on TRS accounts were also included.

October 7, 2009. Dr. Corky Brittan gave the first capstone lecture by a retiring faculty member.  It was held at 4 pm in the Museum of the Rockies Taylor Auditorium with a reception following in the Museum's classroom.  His talk was titled "Craven Images" or the relationship between the sciences and the humanities.

Sept 23, 2009. No-host luncheon at the Strand Union Building.  Ken Hapner provided an update on the new pharmacy program that will take effect for all of those on the university health insurance program.

May 19, 2009. Retired Faculty Dinner at the MSU Foundation and Alumni Center.

January 21, 2009. No-host luncheon at the Valley View Golf Club. The table topic for discussion was "How are you handling the current economic situation as a retiree?