Picture a Scientist, an award winning documentary, chronicles the groundswell of women scientists who are changing the face of science in the United States and around the world.Biologist Nancy Hopkins, chemist Raychelle Burks, and geologist Jane Willenbring lead viewers on a journey deep into their own experiences in the sciences, ranging from brutal gender harassment to years of subtle slights. Along the way, from cramped laboratories to spectacular field stations, we encounter scientific luminaries - including social scientists, neuroscientists, and psychologists - who provide new perspectives on how to make science itself more diverse, equitable, and open to all.

Learn more about this event and watch the recording

2019: Victoria Garrick: Body Image, Self Love, and the Influence of Social Media 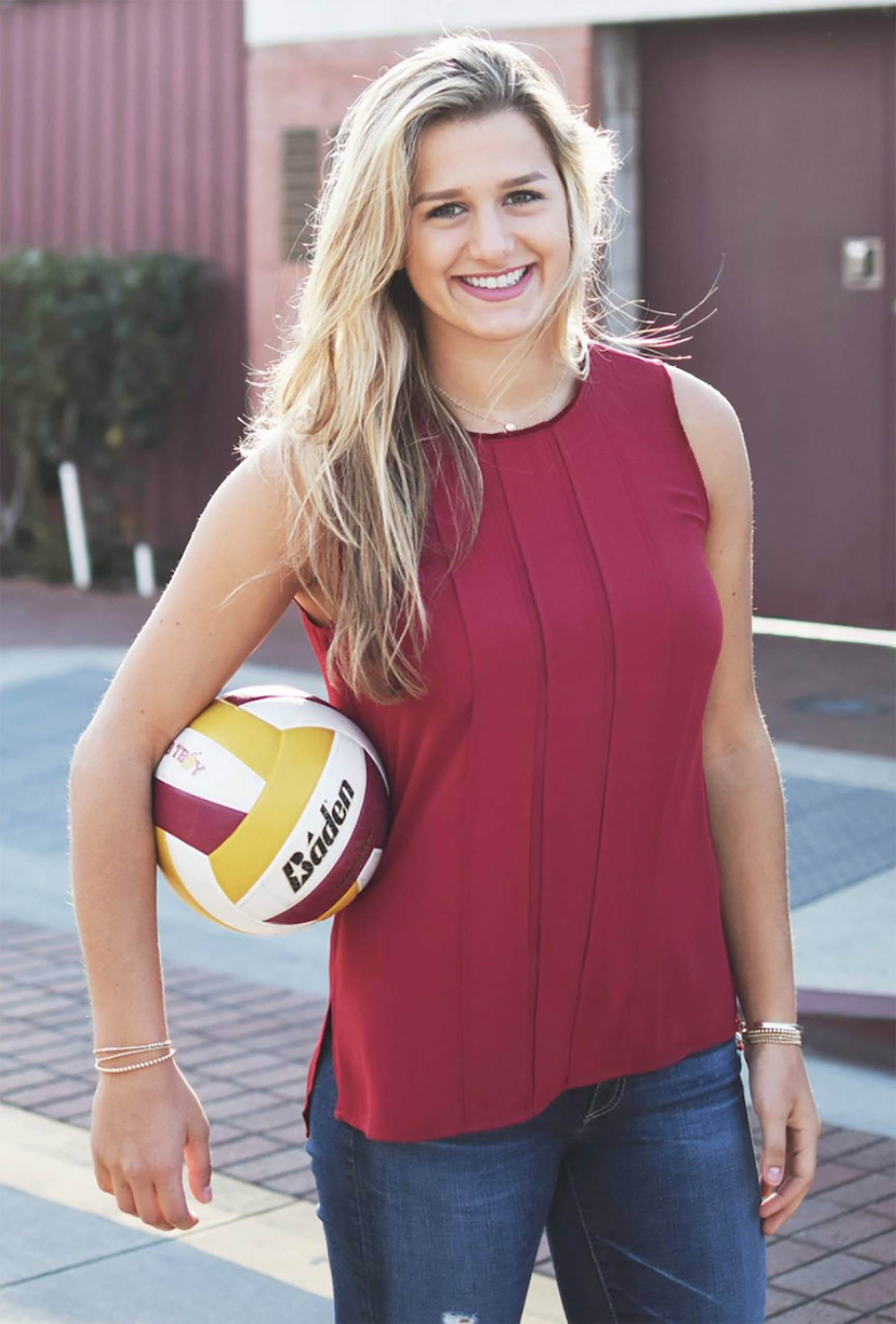 lecture about body image in the age of social media at Montana State University President’s Commission on the Status of Women lecture on Wednesday, Oct. 16, in the Procrastinator Theatre of the MSU Strand Union Building.

Victoria Garrick walked-on to the #1 ranked USC volleyball team in 2015 then became a four-year starter. She’s won a PAC-12 championship, made two NCAA Elite Eight appearances, finished first in the PAC-12 conference with the most total digs in 2018, and ended her career with the top five most digs in USC program history.

Despite a successful athletic career, the high-pressure environment and intense demands of the student-athlete schedule took a toll on her mental health. Garrick shared her story of battling and overcoming depression and anxiety as a student-athlete in her 2017 TED Talk, "The Hidden Opponent,” which has been viewed more than 200,000 times. She connects with young adults and collegiate athletes alike through her social media campaign, inspiring 50,000 Instagram followers to share their authentic selves.

The event was attended by Bozeman locals, MSU staff and students and 35+ young athletes from Gardiner's women's volleyball program.

As part of the mission of the PCOSUW to understand the challenges that face MSU around issues related to diversity and gender equity, the commission invited Dr. Anna Kirkland to come to MSU on March 7th, 2019 and talk about the NASEM Report: Impacts of Sexual Harassment in Academic Science, Engineering and Medicine. 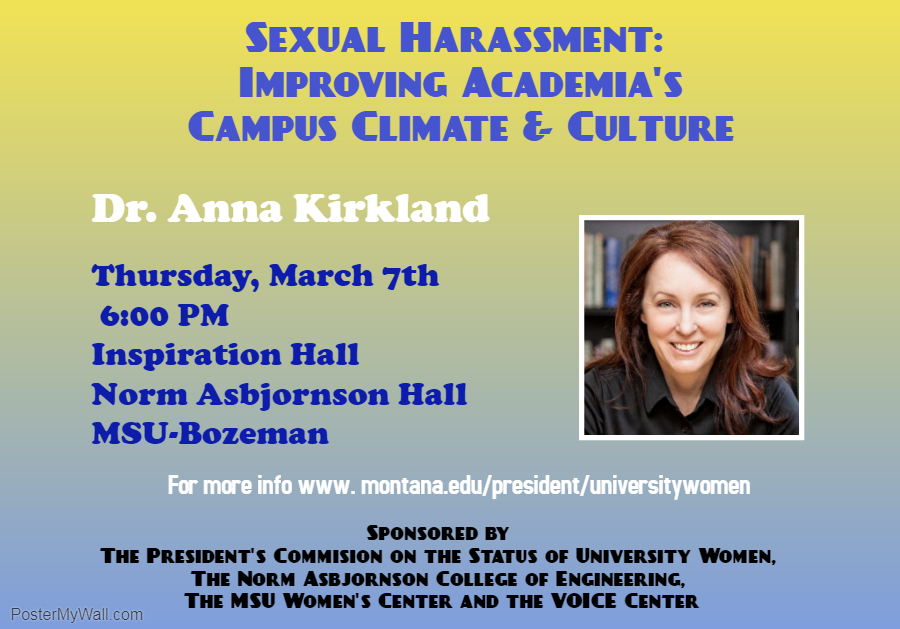 Dr. Kirkland is a member of the NASEM Impacts of Sexual Harassment in Academic Science, Engineering and Medicine Committee that produced a report that indicates “A systemwide change to the culture and climate in higher education is needed to prevent and effectively respond to sexual harassment… There is no evidence that current policies, procedures, and approaches – which often focus on symbolic compliance with the law and on avoiding liability -- have resulted in a significant reduction in sexual harassment.” In her talk, Dr. Kirkland discussed how institutions across the nation are using the findings to improve US campus climates and cultures. She is the Arthur F. Thurnau Professor of Women’s Studies, Director of the Institute for Research on Women and Gender, and Director of the Science, Technology, and Society Program at the University of Michigan – Ann Arbor. 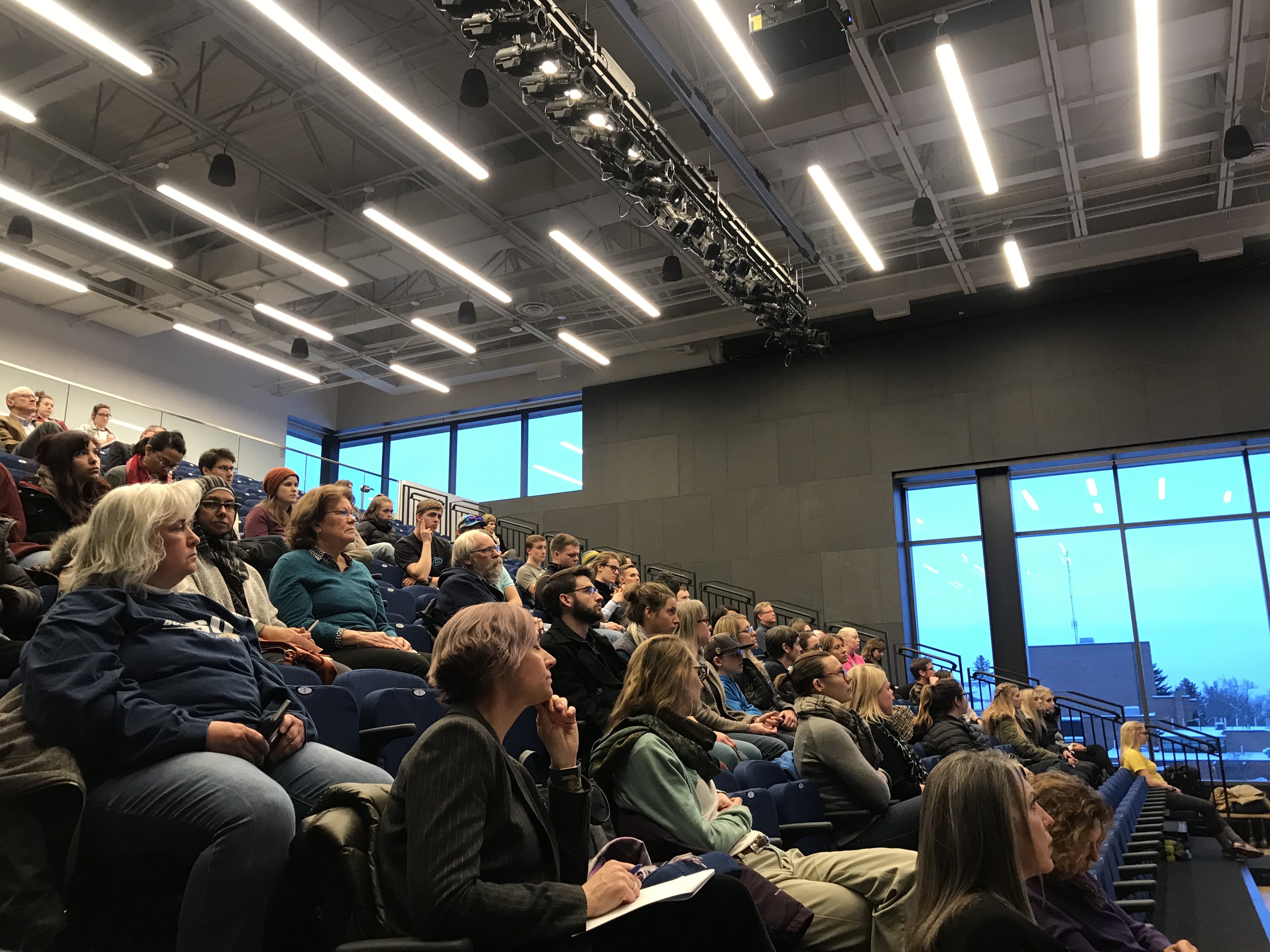 During her visit she met with Campus Unit Leaders,  had lunch with Department Heads and Deans, gave a master class for students and presented a public lecture in the evening. The Commission had the generous support of several sponsors including the Norm Asbjornson College of Engineering, MSU Women’s Center, the VOICE Center, the Office of Institutional Equity, the Center for Faculty Excellence and the Office of the President.

In celebration of MSU’s 125th anniversary in 2018, the PCOSUW honored women leaders, problem solvers and innovators from today and throughout MSU’s history. The list of honorees below were selected from almost 400 nominations from across the state for womenwho have had an impact on the status of women at MSU and are inspiring or have inspired others by their example. 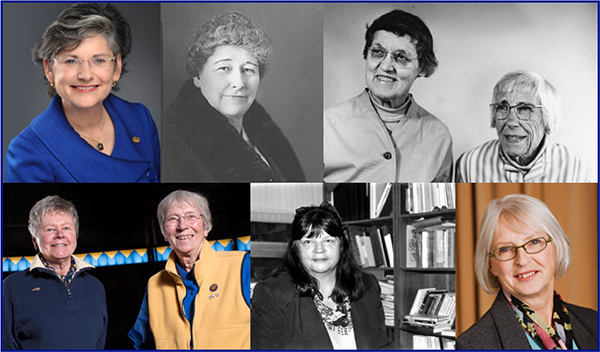 In this year celebrating MSU’s 125th anniversary, the PCOSUW is honoring women leaders, problem solvers and innovators from today and throughout MSU’s history in a presentation at the 1st Annual Diversity Symposium on March 29th.

Come hear the stories of the amazing women who have played a pivotal role in shaping Montana State throughout its 125-year history. Women like Una Herrick, the first Dean of Women, who taught women skills to promote their financial independence in the 1920s. Women like the group who challenged gender pay inequities in the 1970s. And today, the President's Commission on the Status of University Women - formed by MSU's first female president, Waded Cruzado - continues to work toward the discovery and elimination of institutional barriers to the success of women.

For more information and to register, please visit http://calendar.msu.montana.edu/events/25975

2018: Sovereignty of the Soul: Confronting Sexual Violence in Native America

The MSU Women's Center is very excited to announce that Sarah Deer, prominent feminist author, professor and activist, will visit our campus to present the 2018 Shannon Weatherly Memorial Lecture. Ms. Deer's lecture: "Sovereignty of the Soul: Confronting Sexual Violence in Native America," will give us an opportunity to learn about the crisis of interpersonal and sexual violence in Native America.

2017: "Resources for Talking about Workplace and Pay Equity" Lunch 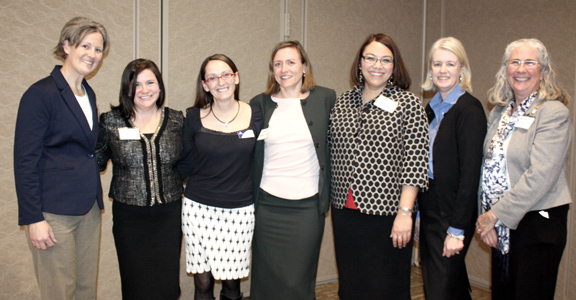 The President’s Commission on the Status of University Women hosted a lunch on January 26, 2017, featuring several MSU faculty and staff, who spoke on “Resources for Talking about Workplace and Pay Equity.” Jessi Smith, professor of psychology and director of ADVANCE Project TRACS, shared research on the role of self-promotion, norms, and situational factors that can hinder or help women advance within the pay structure. Professors Graham Austin, Virginia Bratton, and Amber Raile from the Jake Jabs College of Business presented research on equity theory and language choice for more welcoming and effective discussions on pay, and Cathy Hasenpflug, chief human resources officer at MSU, shared HR tools to help supervisors address equity issues. The presentation concluded with a panel Q & A session.

2016: A Workshop and Lunch for Deans and Department Heads 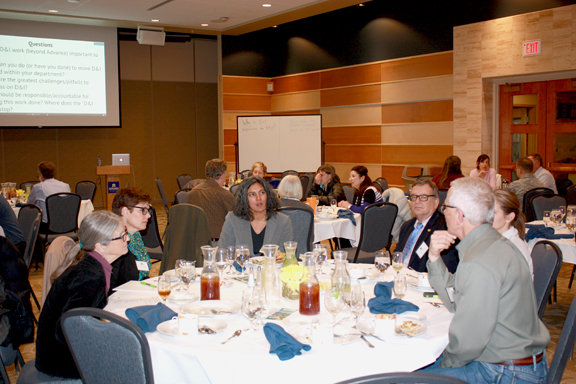 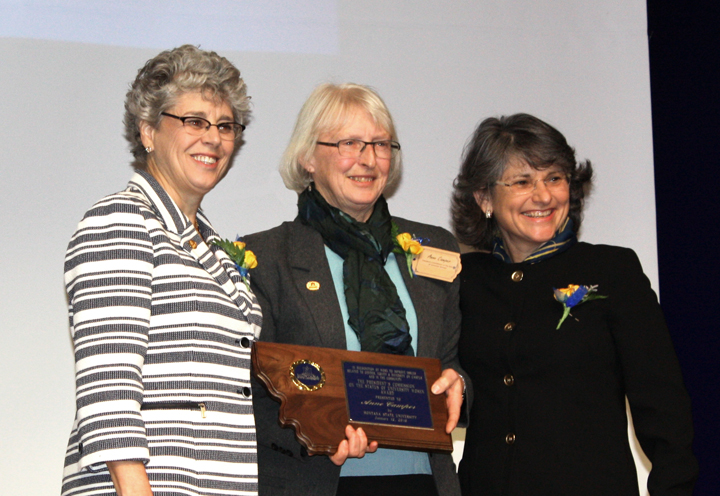 Anne Camper, Montana University System Regents Professor, professor in the MSU Department of Civil Engineering and associate dean for faculty and administration in the College of Engineering, received the President’s Commission on the Status of University Women Award given to a member of the faculty or staff who has established a record of working to improve issues related to gender, equity and diversity on any of MSU's four campuses. The award includes a $2,000 honorarium. Above photo is Provost Martha Potvin, Dr. Anne Camper, and President Waded Cruzado at spring convocation 2016.

How to Write a Winning Nomination for Student Scholarships and Awards

In October, Ilse-Mari Lee, dean of the Honors College, and Betsy Danforth, director of the Women's Center at MSU, presented a session on how to write a winning nomination letter for students for scholarships and awards. Lee, who has had tremendous success in writing letters for students who have won national awards such as Goldwater, Fulbright, Marshall, and Truman, provided tips for letter writers, Danforth discussed inclusive, unbiased language in letters of support and nominations. Co-sponsored by the Center for Faculty Excellence and the President's Commission on the Status of University Women.

2016: Ms. Sarkeesian: “I’ll Make a Man Out of You: Redefining Strong Female Characters

PCOSUW was excited to co-sponsor, along with the MSU's Women’s Center, Anita Sarkeesian, prominent feminist video blogger and public speaker, who visited our campus as the 2016 presenter for the Shannon and Frances Weatherly Memorial Lecture. The lecture was on March 2 in SUB Ballroom A. Other sponsoring Montana State University entities were: Department of Computer Science; Jake Jabs College of Business and Entrepreneurship; College of Engineering; College of Agriculture; College of Letters and Science; College of Nursing; College of Education, Health and Human Development; Office of Activities and Engagement; Diversity Awareness Office; VOICE Center, and The Leadership Institute.

Ms. Sarkeesian’s lecture: “I’ll Make a Man Out of You: Redefining Strong Female Characters,” gave the audience an exciting opportunity to learn about and question gender roles in video games and the popular media. 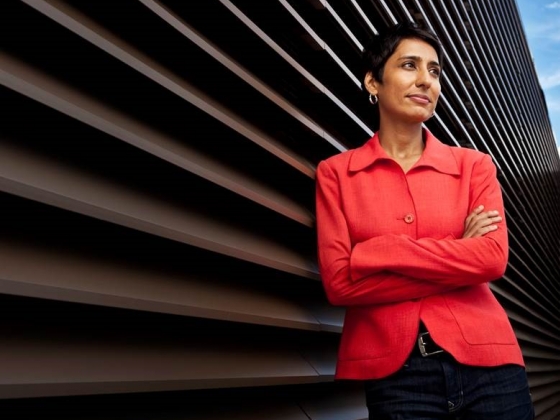 Best-selling author and inspirational speaker, Irshad Manji, addressed a packed house when she presented a lecture and panel discussion on February 22, 2016 at MSU. Manji is a Muslim reformist and founder of the Moral Courage Project, which seeks to empower people of all religious backgrounds to stand up for human rights. For more information, go to http://www.montana.edu/news/15920/irshad-manji-muslim-reformist-and-moral-courage-project-founder-speaks-feb-22-at-msu

MSU is one of only 83 institutions from across the nation – and the only university in Montana – to receive the 2014 Higher Education Excellence in Diversity, or HEED, award from INSIGHT Into Diversity magazine, the oldest and largest diversity-focused publication in higher education. Read more.