The variety is named after Buzz Mattelin, barley grower and supporter from eastern Montana.

MT124112 is a spring, 2-row, hulled barley developed for malt barley production in Montana. MT124112 has a lax head type, rough awns, white aleurone and long rachilla hairs. MT124112 is an F4 derived selection from backcrossing GPC6H into Hockett (ND7293/Bearpaw) four times. The original donor for GPC6H was Karl through an RIL from a Karl by Lewis cross (line number LK644). MT124112 was advanced by single seed descent from the F1 thru F4 generations. It was increased from a F4 plant to produce seed for preliminary yield testing in 2011. MT124112 was tested for agronomic and malt traits beginning in 2012. MT124112 was confirmed to carry the low protein allele for GPC6H via marker assisted selection (See et al., 2002).

Across all environments, MT124112 has substantially lower protein than the top performing malt varieties grown in Montana (Fig. 1). When MT124112 is compared to commonly grown lines, plump percentage and test weights are higher; heading dates are earlier while maturity dates are later; plant heights are shorter and less prone to lodging under irrigation (Tables 1A & B). Earlier heading dates and later maturity date increases time of grain fill by about five days (data not shown). The average yields of all lines reported are essentially equal when grown under the conservative nitrogen applications of malt barley production. However, MT124112 features a gene that consistently maintains malt-appropriate levels of grain protein under high fertilizer, thus displaying a substantially higher yield potential (Figure 2).

Table 1A. 2015-18 Dryland agronomic measurements of the top performing varieties in Montana. As location years do not match for each comparison, MT124112 appears against each measured variety trait. AMBA criteria for malting varieties: AM = All-Malt Brewing (barley only) Adj. = Adjunct Brewing ¹ Based on Fisher's LSD at the 0.05 probability level

Table 1B. 2015-18 Irrigated agronomic measurements of the top performing varieties in Montana. As location years do not match for each comparison, MT124112 appears against each measured variety trait. AMBA criteria for malting varieties: AM = All-Malt Brewing (barley only) Adj. = Adjunct Brewing ¹ Based on Fisher's LSD at the 0.05 probability level 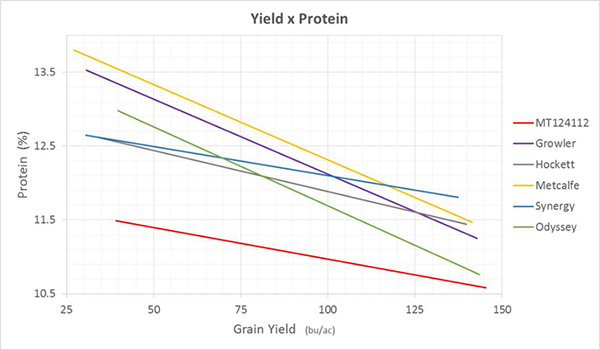 Figure 1. Data from all 2015-2018 Montana trials shows the consistency of MT124112’s low protein levels across a broad range of conditions (38 location years).

Figure 2. Data from a 6 location/year fertilizer management experiment with variable rates of nitrogen. The protein level of MT124112 increases more slowly with concurrent yield increases along the X axis. Note that the grain protein level for MT124112 grown at the highest yield potential was still acceptable, as were other malt quality parameters (not shown).

The malt quality of MT124112 is suitable for both all-malt brewing (using only barley) as well as adjunct brewing. Generally, malting traits are either statistically equal or superior in performance according to the criteria determined by the American Malting Barley Association (AMBA). These traits stay within the acceptable ranges when grown under dryland or irrigated conditions.

Tables 2A & B show the malting traits compared with the other top performing malt varieties. MT124112 has higher malt extract and lower Beta glucan levels in dryland environments, and performs equally under irrigation. Diastatic power is consistently lower, making this line less enzymatically active than most commercially available lines, and thus ideal for all-malt brewing. Alpha amylase, free amino nitrogen, as well as various protein measurements (total malt, soluble, and soluble/total) are all statistically equal to other malting varieties.

When comparing MT124112’s malt quality performance under rainfed or irrigated conditions, it appears that MT124112 performs better under rainfed, particularly in malt extract and beta glucan (Tables 2A & B). However, this difference is primarily due to the lab malting the line. The MSU malt quality lab follows a malt recipe more similar to that used by maltsters; while USDA-ARS has a different steeping regime. Steep regime highly impacts malt quality performance (Turner et al., submitted to ASBC). It happens that most of the dryland data was provided by MSU; while irrigated data was provided by USDA-ARS. Importantly, direct comparisons made here are under the same malting conditions.

MT124112’s improved quality is in part due to faster hydration of the endosperm during malting. The Chapon Test, which steeps seeds for 48 hours, boils seed for 1 minute, and observes seed after splitting longitudinally, reveals the difficulty in hydrating Hockett’s endosperm (Fig 3). Non-hydrated endosperm is white and chalky, while hydrated endosperm is gray and more translucent. In Figure 3, seeds from each line were grouped by visual scoring for their percent of hydrated endosperm. MT124112 has higher endosperm hydration than Hockett or Metcalfe after 48 hour steep under MSU malting conditions. Maltsters who use Hockett have requested a faster hydrating line, because slow hydration requires the addition of hormones for germination to proceed at an acceptable rate, costing time and money.

Table 2A. 2015-18 Dryland malt quality measurements of the top performing varieties in Montana. As location years do not match for each comparison, MT124112 appears against each measured variety trait. AMBA criteria for malting varieties: AM = All-Malt Brewing (barley only) Adj. = Adjunct Brewing ¹ Based on Fisher's LSD at the 0.05 probability level

Table 2B. 2015-18 Irrigated malt quality measurements of the top performing varieties in Montana. As location years do not match for each comparison, MT124112 appears against each measured variety trait. AMBA criteria for malting varieties: AM = All-Malt Brewing (barley only) Adj. = Adjunct Brewing ¹ Based on Fisher's LSD at the 0.05 probability level

Since 2015, trials have not had consistent disease pressure for disease scoring, although occasional observations of rust and leaf spots occur in Sidney under irrigation. We have ongoing trials in Sidney and North Dakota evaluating fusarium infections with subsequent DON (deoxynivalenol) testing by North Dakota State University. Not surprisingly, MT124112 responds to head blight similarly to Hockett.

Table 3. Rates of DON accumulation over three years of testing. Analysis fails to show statistically significant differences over time. For brewing, the tolerance is <1ppm DON.

We purified MT124112 in 2017 by planting 100 F9-derived F10 headrows at Bozeman Post farm. We evaluated for phenotypic uniformity before bulking all headrows. The 2018 breeder strips appeared uniform and were regularly rogued by barley breeding employees and Foundation staff.

MT124112 is well-suited for production across all malt barley growing regions of Montana.

• Can be grown at higher yield potential without damaging quality

• Shorter plant height and low percentage of lodging under irrigation

US Wheat and Barley Scab Initiative