Koji is a processing technique traditionally used with rice to make Japanese sake. Brewers looking for unique flavors have started to take interest in the flavors that can come from this interesting product and to that end we (MSU Barley, Malt & Brewing Quality Lab) are hosting a Doctoral Research Student, Aline Brito, as she dials in the process for a unique Montana offering.

In last quarter’s publication we highlighted the Koji process and pointed out some of the bespoke products currently available in the US beverage market. Here we go into greater detail of the specific work being done at MSU to explore this developing ingredient. Brito joins us from Brazil, where she began her PhD research at the Universidade Estadual de Campinas. Although she was able to generate initial protocols for the processing in South America, an initial period has been devoted to translating those techniques to our local equipment. She is also working to determine the best parameters for fermenting koji in combination with Buzz barley, the most recently released malt variety from our Montana Breeding Program. Read on to learn more about the specifics of her project!

Buzz barley is a spring two-row type that was released from the MSU in 2019. Buzz incorporates characteristics which allow it to maintain stable plumps and low protein under dryland growing conditions. These traits particularly shined in last years extreme drought conditions, allowing this variety to maintain malting quality while much of the US malt barley crop ended up as feed due to poor conditions. Although Buzz is a traditional hulled type, Brito’s work is making use of grain which was pearled by Montana Milling in Great Falls, removing ~10-15% of the outer grain surface. A.k.a “dehulling”, this process sands or polishes off the outer seed layers, allowing the koji fungi better access to the inner starchy endosperm of the seed. We are excited to see what comes of koji processing in combination with Buzz as, in blind sensory trials, we have found that brewers tend to prefer Buzz over other varieties! More info can be found on Buzz on our website in our Barley Variety dictionary: www.montana.edu/barleybreeding/learning-center/barley-variety-dictionary/

Koji processing starts with washing and steeping to allow the grain to soak up moisture. Brito is testing three lengths of steep time: 6, 7, and 8 hours. This is followed by steam treating, allowing the grain starches to cook (makes them more accessible to enzymes), and also sterilizing the grain to ensure only the desired/introduced fungi strains will be present. We are able to achieve these steps at research scale in a pressure cooker. Following this, the grain is moved to glass Ball canning jars, inoculated with fungi and allowed to ferment for varying treatments of 40, 44, or 48 hours in a commercial bread proofer. The temperatures is maintained at roughly 86-90 ᵒF for the first day and rises to ~93-97 ᵒF in the second day. The last stage is kilning, for which we make use of our micro malting machines, similar to what a craft maltster might use for production of traditional malt. Brito is experimenting with both base style (low/slow) drying profiles, as well as more flavor/color forward methods such as production of caramel malts. In the caramel malt processing we make use of a sous vide water bath at 149 ᵒF (same as a common brewer’s mash temperature), which allows some starch to sugar conversion within the grain and prior to kilning.

Brito is working with two specific strains of fungi: the traditional koji form Aspergillus oryzae, and Aspergillus luchiensis, which is part of the black Aspergilli and is an important industrial workhorse used in Japan to produce a distilled alcoholic beverage, awamori. Brito’s initial trials in Brazil yielded two widely varying specialty products. The A. oryzae had comparable extract and enzymatic content to that of traditional malts but with higher levels of viscous cell wall remaining and evoking floral flavors of jasmine tea, while A. luchiensis had low extract and was highly acidic with high protein modification and provided more of a sour dough flavor profile.

Brito’s project has two objectives: 1) To evaluate how changes in koji-barley fermentation steeping and fermentation time influence koji metabolites and malt quality, and 2) To determine end quality and sensory profiles of beers brewed with the products of her work. She is currently finalizing equipment parameters and will soon be generating koji malts to be evaluated via hot steep sensory (think of this like making koji tea) as well as simplified analytical evaluations such as extract and enzyme measures. From these results she will select the best conditions and conduct metabolomic analysis to determine how chemical profiles are affected by the treatments. The chemical profiles will be paired with sensory tastings and later this summer we will brew with the two most successful products.

This project is a fun and exciting way for us to explore the art of developing culinary products for the brewing industry and we are thrilled to learn and collaborate with Brito. We hope to see you out and about this summer and would love to chat more on this project as we intend to man an educational booth at various brew fests around the state – perhaps if you seek us out, we will have some Koji Buzz for you to sample! 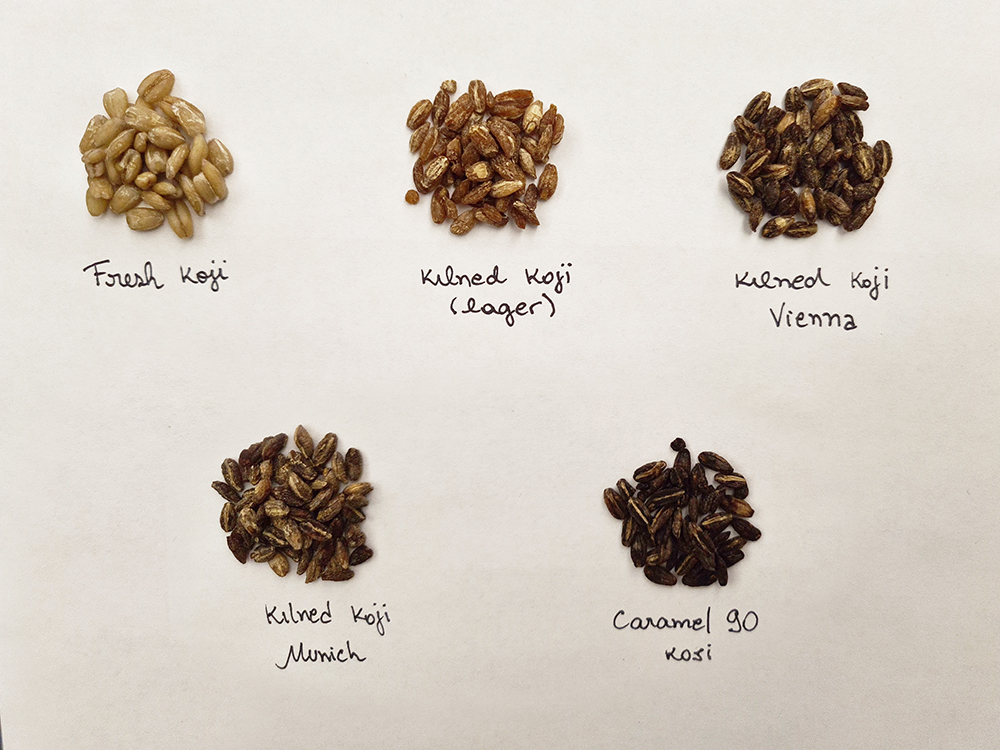