One reason Craft Beer has gained such popularity is the unique flavors and ingredients adventurous brewers incorporate into their beverages. Ranging from highly traditional to off-the wall, you can find a good spectrum of flavor and styles to suit your taste. An old tradition that is starting to be adopted in a new way by forward thinking American brewers is koji processing, a practice widely found in Asian cultures. Utilized for centuries (originally discovered in Japan’s Muromachi Period of 1136-1573), koji is commonly used to modify grain for use in sake, soy sauce, miso, and shoyu (Japanese soy sauce). The process utilizes fungi (commonly Aspergillus oryzae) to modify grain prior to fermentation and the product is a loosely comparable alternative to traditional Western malt. Koji “malts”, having a lower enzymatic profile, would be used similarly to other adjunct grains in a brewers grist bill. Like malting, koji processing promotes the breakdown of grain structures and development of the enzymes required for starch to sugar breakdown, a key aspect for fermentation. Koji can be applied to many different types of grain and other starch sources, but commonly barley, rice and soybeans are used. Many tend to associate koji with sake, and akin to sake Koji malts can evoke desirable flavors well outside the realm of malt, such as apple, tropical fruit, and citrus! These flavors come about in part from the fungi’s production of citric, succinic, and kojic acids.

Koji processing starts by washing the grain, then allowing it to soak and pick up moisture. In the case of barley either hull-less or pearled options would be used rather than the hulled malt barley commonly known to brewers. Working without a hull allows the fungi better access to the grains central starch reserve. Post washing the grain is steam cooked, gelatinizing the hydrated starch and achieving sterilization prior to adding the fungi. This ensures only the targeted koji fungus is growing in the coming fermentation step. Next, the grains are sprinkled with koji starter and kept in warm, high humidity conditions for roughly a day, allowing the fungi begin the transformation. During incubation the grains may be agitated to break up the koji a bit. Once completed the grain can be used directly or dried to preserve the final product.

Examples where you might find a brewer has taken advantage of Koji include sour beers where adding koji to the mash, say for example in a Berliner weisse, will dramatically cut the time needed to properly kettle sour a beer. An inclusion rate of 25% koji can cut down souring time from a weekend long stew to souring within a typical 1 hour mash time. In addition to bespoke flavor Koji has other potential benefits, for example Kojic acid is noted for its inhibition of oxidation, which might suggest some utility in counteracting astringency that arises from oxidation. Additionally, Koji fermented grains are touted for having health benefits such as digestion aid via improvement of intestinal flora, acting positively for skin condition, and maintaining body immunity. Who could complain about a cold beer that may have some health benefits?!

If you consider yourself a foody or an adventurous beverage seeker your probably interested to learn where you might find a Koji beer. As this trend is on the very cutting edge you might be hard pressed, but as more and more interest is popping up you are likely to see options in the near future. Some known opportunities are out of Ronin Fermentation Project based in California, and Matchbook Distilling in New York – both of which are highly worth checking out! If you’re really hoping to learn more about this unique process closer to home in Montana you could also schedule a tour with us in the Barley, Malt & Brewing Quality Lab at MSU Bozeman. We’ll happily dig into the science behind this novel ingredient with you! Through the first half of 2022 we will be hosting visiting PhD candidate Aline Brito, who is investigating several koji strains. Aline is working to develop the ideal processing conditions, assess what impact this has on quality, and next summer we will brew some beverages for flavor assessment. Keep an eye out for our next Craft Beer Connect article as we will highlight Aline’s specific work! 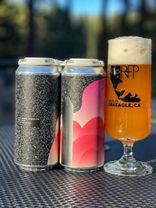 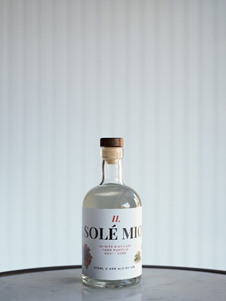 Sole Mio is a New York style shochu (Japanese spirit) from Matchbook Distilling Company in NY which utilizes koji to process puffed grains including millet, kamut, and amaranth. The distillate is fermented with pumpkin, corn and a light whiskey yeast to produce a spirit with a zippy sour apple candy flavor in the start and squash and white flower in the finish. *Image credit – Matchbook Distilling