Micro Malters in the autoclave room 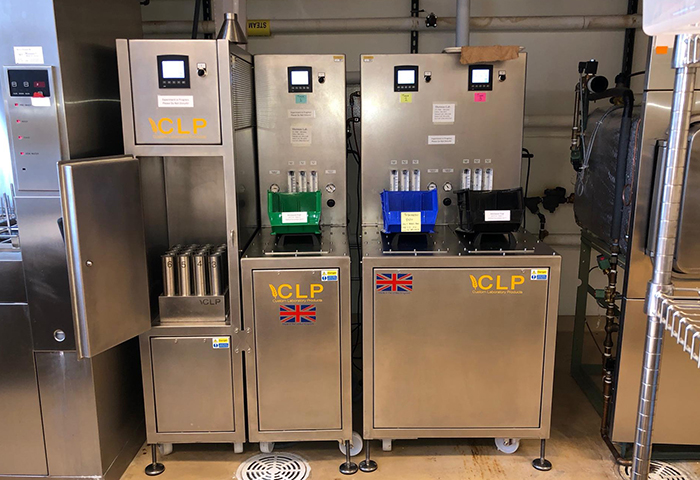 Some of you may have noticed the new equipment in the autoclave room. These are some of the first arrivals of various instruments for the newly formed MSU Barley Malt Quality Lab! Specifically, the two units are a “Steep/Germ” and “Combi” (combined kiln and steep/germ). Jointly the two machines will allow us to micro-malt 48, 100g barley samples each week - or roughly 2500 samples a year. Malting is a tradition that historians believe pre-dates recorded history and contributed to the movement of communities from hunter/gatherers to settlements. The primary purpose of malting is to transform nearly indigestible grains into a friable ingredient for making beer (and many other food products). The malting process consists of three main steps including steeping, germination, and kilning. The steeping process consists of roughly two days where the grain is submerged for hours at a time between air rests to bring the grain moisture up to ~45% from the roughly 7-12% it was at harvest. This signals the grain into its germination phase – similar to the conditions of spring rain. The germination phase takes 3-5 days during which time the grain is kept at high humidity with occasional turning to prevent the growing rootlets from matting. During this period enzymes such as B-glucanase and proteases are working to break down the endosperm cell walls and protein matrix. This exposes the grains starch granules making them accessible to yeasts later in the beer making process. The goal of the germination phase is to get maximum grain modification without allowing the acrospire (eventual shoot of a growing barley plant) to emerge and begin using the starch reserves. The final step of malting is to kiln the grain – this 24hr process is primarily a preservation act, bringing the grain moisture back down to ~4-6% and allowing the grain be stored without worry of mold. This low/slow heat also is the process of creating a “base malt” where essential enzymes such as A-amylase are conserved to later break the grain starches into sugars for the brewing process. Craft malting – which serves the recent upsurge of craft breweries – may take the kilning step to more advanced levels involving different heating techniques to create the caramel, crystal, and chocolate malts that you would find at your local home brew store. The two units you now see in our autoclave room automate these three phases allowing our breeding program to greatly increase the quality and volume of data generated in support of making barley selections. If you would like to know more about the malting machines and/or our program come find me and I’d love to discuss it further with you!