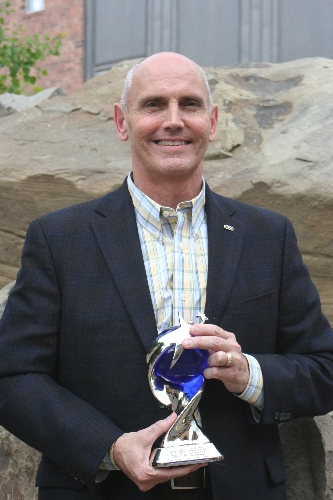 Richard N. Reisig grew up in Billings, the youngest of five children. While still in high school at Billings West, he took an accounting class that seemed to resonate with him. “At the time I wasn’t sure what I was going to do. I looked at architecture but that took five years and I didn’t want to do that!”

So Rick became a Bobcat, majoring in accounting at Bozeman. “I thought I’d get my accounting degree, pass the CPA exam and then maybe think about law school. After my first law class in college I kicked that one off the list.”

He graduated from Montana State University in 1982 with a B.S. in Business with an Accounting option. By the time he graduated he already had a job lined up with Hamilton Misfeldt in Great Falls.

“I took the exam in May 1982 and was notified in August that I had passed all parts. I started at Hamilton Misfeldt on July 6th that year.” Rick officially became a CPA in 1983 because he already had experience working for Weber Dobson in Billings for a couple of summers.

It was audit season when Rick started with the firm and he realized he liked working with different businesses. “I like the idea of being an independent and objective party. You’re the third eye and you get to deal with a lot of accounting issues.” And so Rick’s expertise in auditing began.

Rick is known for his leadership as an active member and past-president of MSCPA and for his service on the State Board of Accountants. “I think volunteering creates another opportunity to learn. It allows you to learn more about your profession, but also how to deal with other people from other businesses, how to voice my opinion and listen to others to help shape my opinion. Yes, you want to give back to the profession that gives you so much but volunteering is selfish, too, because you learn so much and experience so much personal growth. I’ve made numerous lifelong friends from volunteering.”

Through the years Rick has been an indispensable volunteer for MSCPA. He has served on the Not-for-Profit Committee, the Governmental Accounting, Auditing and Financial Reporting Committee, the Relations with the State Bar Task Force, the Compensation and Benefits Committee, numerous Annual Meeting Planning Committees and on the Board of Directors, rising through the ranks as Director, Secretary/Treasurer, President-Elect and finally as President in 2001-2002.

Rick has always been one to have fun in whatever he’s doing and never is that more apparent than at annual meetings. “One of my fondest memories as an MSCPA member is when Dan Vuckovich was president and we did the Johnny Carson thing at the Business Meeting. I wrote the script in Dan’s suite the night before while Dan went out partying with Galipeau.” But that was the beginning of a whole new model for MSCPA Business Meetings and Rick’s script set the bar high for future conventions. In fact, it is thanks to Rick that Montana still has an annual meeting. When other state societies stopped holding conventions Rick, while MSCPA President, encouraged the Board to “beef up” the meetings, bring in higher quality speakers and ramp up the fun. It’s been a very successful suggestion!

After his time as MSCPA President, he became of member of the State Board of Accountants, Montana’s regulatory agency.  “It used to be you could serve five years, then sit out a year, then be reappointed. When the rules changed and you could be reappointed I was the first who didn’t have to sit out a year.” He went on to serve as Chair of the State Board in 2008-2009 and again in 2010-2011. “This really helped me solidify the pride I have in the profession. It introduced me to people who have become mentors to me on a national level.”

His service on the State Board helped him to be appointed as the Rocky Regional Director on the National Association of State Boards of Accountancy (NASBA) on October 29, 2013. Rick is currently being considered for an at-large director position with NASBA—a decision that will be made by the end of June.  “I’m pretty proud to represent the small guy, the local firm and the sole practitioner, the Rocky Mountain region—I’m proud to share our perspectives on these issues.”

Perseverance has been a theme throughout Rick’s service. “Rarely did I get these positions on the first try. That’s true for the MSCPA Board, the State Board and NASBA, but I kept trying.” Rick was initially disappointed when he didn’t get a position on the FAF Private Company Council, but soon after, he was appointed to the AICPA Auditing Standards Board. “Sometimes it doesn’t work out but something else opens up.”

And now with all those leadership examples, Rick is being presented MSCPA’s highest honor: The George D. Anderson Distinguished Service Award. “For years I’ve looked at this award as the pinnacle of a career. I’m so proud and appreciative, and humbled, to be associated with prior award recipients. I appreciate my nominators so much, that that they think I’m worthy enough to be considered for this award. This is the pinnacle of my career so far.”

Looking to the future, Rick has a very poignant goal: “I’d really like it if some day my kids meet someone who says ‘Your dad did a lot of good things for the profession.’ You hope that when you are 75 someone will look back and say ‘I’m glad I had the opportunity to get to know him or work with him.’”