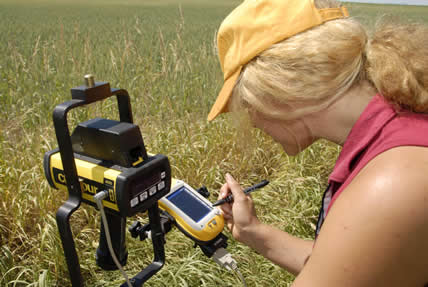 Jennifer Watts, MSU graduate and now master's student in Land Resources and Environmental Sciences, is trying to learn what the LandSat V satellite images can convey about land cover, with the goal of developing data to invigorate the carbon sequestration market.
Photo by Kelly Gorham

Excess carbon dioxide in the atmosphere is a major contributor to global warming, and one of the methods proposed to reduce mankinds CO2 emissions is carbon sequestration — storing CO2 in deep within the earth and through farming and forestry practices. Scientists at MSU are on the forefront of both geologic and terrestrial carbon sequestration research.

Geologic sequestration involves injecting liquefied or "supercritical" CO2 deep underground where it is stored in porous rock formations. The oil industry has been injecting relatively small amounts of CO2 underground for decades to enhance oil production, but now scientists are looking for ways to put billions of tons of CO2 safely underground. For decades, various industrial operations have injected and stored CO2 and other gases underground, and naturally occurring deposits of oil and gas trapped underground show scientists that CO2 can be safely and permanently stored beneath the ground. Now earth scientists at MSU are using new theories about sedimentary rocks, computer modeling and three-dimensional seismic data to characterize the subsurface rock formations in the northwestern United States where CO2 may be stored. This work tells scientists how CO2 behaves and moves through underground formations and how to make sequestration work at different injection sites.

Other MSU scientists are working working on "just in case" technologies, designing methods to seal CO2 injection sites. Scientists at MSU's Center for Biofilm Engineering are creating biofilms barriers — layers of microbe-rich slime — that will plug the pore in underground rocks, reducing the number of pathways CO2 could use to escape. MSU's research is focused on developing biofilms that will survive at the pressures and temperatures found near carbon sequestration sites.

Finally, MSU is part of two organizations focused on carbon sequestration: the Big Sky Carbon Sequestration Partnership and the Zero Emissions Research and Technology Center (ZERT). The partnership is one of seven regional partnerships across the country whose mission is to work out the best approaches for capturing and permanently storing greenhouse gases.

ZERT partners MSU with West Virginia University and five national laboratories to examine the basic science of carbon sequestration and the technology to monitor stored CO2. ZERT maintains an extensive field-testing site just west of MSU that has been described as the only one of its kind in the country.