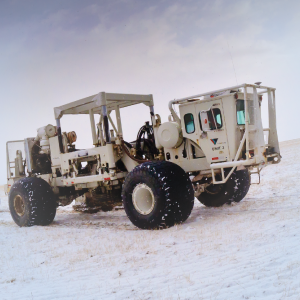 The Big Sky Carbon Sequestration Partnership (BSCSP) is based at Montana State University’s Energy Research Institute. The partnership is supported through a cooperative agreement with the U.S. Department of Energy (DOE) as one of seven regional carbon sequestration partnerships in the country. BSCSP collaborates with key stakeholders in the identification, development, and monitoring of viable and safe approaches for storing regional carbon dioxide (CO2) emissions. The BSCSP region encompasses Montana, Wyoming, Idaho, South Dakota, eastern Washington, and Oregon.

The overall purpose of DOE’s Regional Carbon Sequestration Partnership program is to develop a collaborative research network to help develop the technology, infrastructure, and regulations needed to implement large-scale carbon dioxide (CO2) capture and storage opportunities across the country. Launched in 2003, this initiative is being completed in three phases.

BSCSP’s Kevin Dome project is one of several DOE Phase III Development projects with an intent to inject one million metric tonnes of CO2 into a storage formation while validating site characterization, modeling and monitoring techniques.  The target reservoir is the middle Duperow, a carbonate (mixed dolostone and limestone) interval of ~100 ft thickness that produced CO2 in drill stem tests of some historic wells near the apex of the dome but contains brine down dip.  The original project scope planned to use the gas cap as the CO2 source and the same reservoir in the down-dip brine leg as the storage target. This approach could provide some unique advantages: 1) wellbore data (logs and core) from the gas cap and brine leg would allow comparison of reactive reservoir rock and cap rock exposed to CO2 over geologic time vs. an engineered storage timescale providing insight on geochemical impacts on injection and storage; and 2) the concept of domes as storage hubs where CO2 could be injected for storage and produced for enhanced oil recovery (thereby decoupling CO2 production and utilization rates) could be tested.

In the process of the Kevin Dome site characterization, it was determined that, counter to regional data trends, the targeted storage region had less than 10,000 ppm total dissolved solids (TDS) which means it classifies as an Underground Source of Drinking Water (USDW) by the primary criterion in the Environmental Protection Agency’s (EPA) Underground Injection Control (UIC) regulations.  The storage reservoir would likely qualify for an exception under most UIC well classes, but Class VI regulations specifically for CO2, which were enacted after the start of the project, do not allow for exceptions. Thus, the project is unable to secure a CO2 injection permit

In the project characterization phase valuable, and in some cases unique, data and samples were acquired for a natural analog that has securely stored CO2 for over 50 million years including:

The project has been re-scoped to maximize geologic carbon sequestration learning from these data and samples.