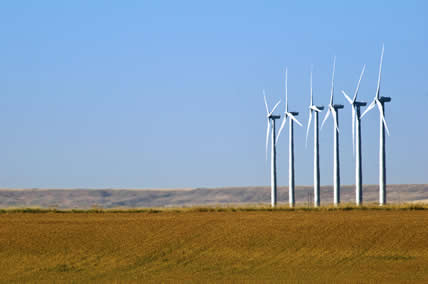 Montana State University has been a leader in wind power research for more than a decade. Research conducted by scientists at MSU will make it possible to generate more electricity from wind more efficiently than ever before.

Montana's wind resource is among the top 5 in the nation, and this resource is being actively developed today. As of 2009, over 270 megawatts of installed capacity exist in Montana, up from a few hundred kilowatts in 2003. The Department of Energy estimates that by 2030, Montana's wind power industry could produce as much as 5261 megawatts. At this level of build-out the industry could provide almost 17,000 jobs during construction and 3,000 permanent jobs: Over $600 million of construction-related benefits would be realized by local economies, and $119 million in yearly benefits would be seen each year over the 20-year period.

MSU's wind research is focused on making wind power future as efficient and affordable as possible. MSU research will help reduce the cost of owning and operating wind turbines, increase turbines' life-cycles, and serve as a model for working with local manufacturers to get wind sites up and running smoothly.

Right now, MSU engineers are studying the strength and durability of wind turbine blades, which can account for up to 30 percent of a wind system's initial cost. Other work focuses on turbine generator and power control systems. MSU-spurred advances in turbine design and materials will help reduce the cost of owning and operating wind turbines.

Other work at MSU has been focused on the manufacturing side of wind power. MSU works with local manufacturers to commercialize its research, making it possible for companies to build turbine components locally. This new manufacturing will produce technical jobs for the state for years to come.

MSU is also working with the surrounding states to develop wind turbine sites. Eventually, these will include utility-grade and stand-alone sites that will boost the economies of rural areas around the region. MSU already has an agreement with the University of Wyoming and will extend its activities into the Dakotas, Idaho, Oregon, Utah, and Washington.

MSU is home to the Wind Applications Center (WAC), a federally-funded program that develops and coordinates wind energy education at the university level; supports outreach efforts through education and dissemination of wind energy information; and works with industry, local/state/federal government, and individuals to utilize the best engineering and scientific practices in all areas relating to wind energy implementation.

The WAC also supports the companion "Wind for Schools" program and has assisted in installing numerous small wind turbines at K-12 schools around Montana to aid in energy education efforts.