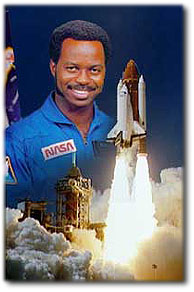 The program is named in honor of Ronald E. McNair, a NASA mission specialist astronaut and nationally recognized physicist. Dr. McNair, who grew up in poverty and segregation, lost his life when the space shuttle Challenger exploded on Jan. 28, 1986. The McNair Program was established by Congress in his honor.

Ronald Erwin McNair was born in Lake City, South Carolina on Oct. 21, 1950. McNair came from a low income family. He graduated high school in 1967 as the valedictorian of Carver High School. He received his bachelors degree in Physics from North Carolina A&T State University in 1971. McNair earned his Ph.D. in laser physics in 1976. Dr. McNair would later be granted an honorary doctorate of laws from North Carolina A&T State University, honorary doctorate of science from Morris College, and an honorary doctorate of science from the Univeristy of South Carolina. He was awarded many distinctions including being a Presidential Scholar, a Ford Foundation Fellow, a National Fellowship Fund Fellow, and a NATO fellow. Dr. McNair was the second African American to fly in space when he launched from Kennedy Space Center on February 3, 1984. Two years later he was aboard the U.S. Challenger space shuttle when it tragically exploded on Jan. 28, 1986.

The McNair Scholars Program at Montana State University-Bozeman is one of the premier and nationally recognized undergraduate programs on campus. The essence of our program is to successfully combine faculty mentoring, undergraduate research, and academic support services for students whose families have not traditionally participated in post-secondary education.  Specifically, those students who are the first in their families to attend college and are from low-income families OR are members of ethnic/racial underrepresented minorities.