The Stegner lectures are sponsored by the Wallace Stegner Chair in Western American Studies and continues the legacy of the late Wallace Stegner, the Pulitzer Prize-winning novelist, short story writer, environmentalist and historian who is now often called the “Dean of Western Writers.” Stegner spent part of his childhood in Montana, and he notably spoke at MSU shortly before his death in 1993. Based in the MSU College of Letters and Science, the MSU Wallace Stegner Endowed Chair in Western American Studies focuses on teaching and research in history, literature and philosophy with a concentration on pressing Western issues and is supported by the Stegner Chair Endowment. The annual Wallace Stegner lecture is usually held in the spring semester.

Appropriating the West (And Other Petty Larcenies)

The Long Way Home: All Things Green and the Possibility of Us 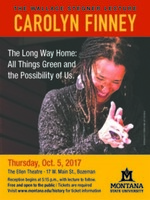 Slavery and Freedom in the Old Northwest

Elegant Conservation: Rediscovering a Way Forward in a Time of Unprecedented Uncertainty

God's Red Son: The Survival of the Ghost Dance 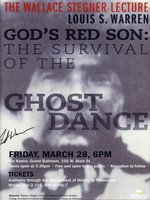 An Evening with Sherry Smith

An Evening with Terry Tempest Williams 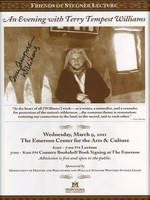 An Evening with Sylvia Earle

An Evening with Peter Matthiessen

The Man who Wasn't Darwin: Alfred Russel Wallace and the Founding of Evolutionary Biology 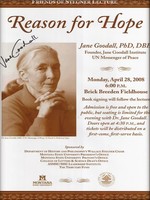 The Devil You Don’t Know: Cancer as an Infectious Disease 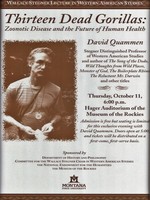 Water and Empire in the American West: Past, Present, and Future

Failure: The Transcontinental Railroads and the Making of Western Modernity 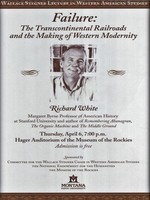 Saving Nature in Time: The Past and Future of Environmentalism

Two Western Writers on Nature and US

The Land Ethic: The Utterance of an American Isaiah

Writing the Wild: Landscape in Fiction and Non-Fiction 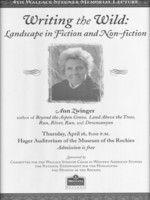 Poster of the 1998 Stegner Lecture with Ann Zwinger

The Deer by the Road, Judge Wells and Home Dance: A Quarter Century's Impressions of the Endurance of Native Sovereignty

Living Right in the Rockies: The Impact of Wallace Stegner's Work on Western Architecture

Reading from Where the Bluebird Sings to the Lemonade Springs 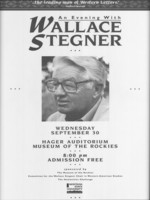