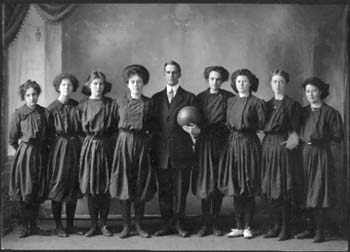 The 1910s opened with the renewal of an old argument between the State University in Missoula and Montana State College in Bozeman about whether to consolidate into a single institution with each handling different aspects of a combined curriculum. MSC President James Hamilton fought against this merger, wanting the College to remain a separate unit in order to fulfill his dream of having the college become another MIT.

During the 19-teens, campus authorities (and parents) continued to be concerned about the social habits of students. Concern centered especially on controlling the environment in which women students lived. Prior to this time, students had lived in local residences that provided room and board. In 1910, Hamilton Hall (named after President Hamilton's deceased wife) was built to house the majority of women students. It would remain a center of campus social life well past mid-century. 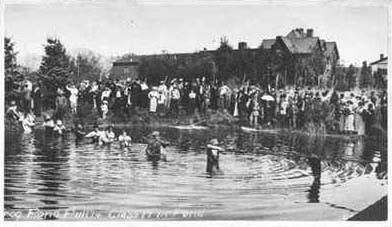 In 1911 and 1912, in response to the construction of a campus residence for women, a few male students organized the first Greek letter societies on campus, Delta Chi and Kappa Nu. But in 1913, due to pressure from faculty members, President Hamilton and the Board of Education insisted the fraternities be banned because of concern that fraternities were too exclusive. This ban was imposed on the College, but not on Missoula's campus. For a period of three years, MSC fraternities were formally reduced to the status of clubs, although they still operated along fraternity lines. This ban was lifted in 1916 in order to ease the burden placed on the boarding institutions in town caused by a surge in the number of students enrolled.

This decade also saw MAC's involvement in World War I. The students became intensely patriotic and in 1916 a large group of men climbed Mount Baldy north of Bozeman and constructed the "M". In 1917, President Hamilton adopted the Reserve Officer's Training Corps (ROTC) program and the next year the Student Army Training Corps (SATC) program in order to better prepare the young men on campus for military service. Hamilton saw ROTC as an opportunity to fulfill one of the requirements of a land grant college under the terms of the Morrill Act, namely to provide military instruction and drill for the students. These programs also provided funds that Hamilton could use in furthering his vision of transforming MSC into a first-rate technical school. Spurred along by Dean of Women Una Herrick, the women students were encouraged to fill vacancies in business and the work force that were being created by the service of young men in uniform.

There's the making of a soldier deep in every human heart,
No matter what the human's sex or size is.
When it comes right to a showdown, every one will do his part,
To count for something in most any crisis.

When the country called for soldiers, we just handed her a few,
To help her lick the bird they call the Kaiser.
But a measly little gathering was started out, to do
A man sized job. He wouldn't recognize her.

There were those who thought preparedness was a foolish sort of thing,
And, of course, we have the ordinary slacker;
But the pride of all the Nation "which has never known a king,"
Is the man who showed he'd give his all to back her.

Be it men or institutions who have given all they own,
They have shown the true and patriotic spirit.
They have helped to make the Kaiser hold his aching head and groan,
For he certainly is very sad to hear it.

As a military backer you can count on Montana State
As one among the patriotic leaders,
For her boys have gone in training with a lust for German hate,
And she's represented in the "Corps of Feeders."

She's behind the military, she's behind the U.S. Bond,
She's a backer and believes in Mr. Hoover.
She's been stimulating war corps to be sent across the pond,
And the German propaganda cannot move her.

We are all behind our College in this military game,
Though we're hoping that the war will soon be ended.
When the Kaiser and his cohorts have been driven home in shame,
They will know M. S. C.'s soldiers are just splendid.

In 1919, Hamilton relinquished the college presidency to agronomist Alfred Atkinson in favor of taking the position of the Dean of Men. 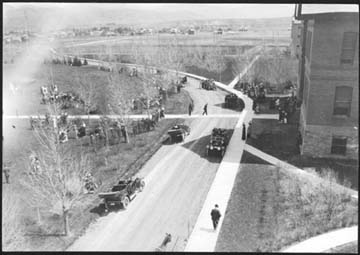