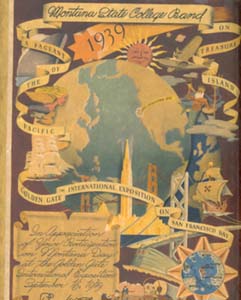 The early 30's witnessed innocent and not-so-innocent forms of student behavior. In the eyes of the administration, too many students were smoking heavily, hoboing (hopping trains), and participating in secret marriages (because campus policy prohibited students from being married). In 1930, Una Herrick, Dean of Women, in an effort to curb some of this behavior decided that the women on campus had to be in Hamilton Hall by 11 pm instead of midnight. With President Atkinson out of town at the time, the students immediately protested. They organized a boycott of classes that lasted 4 days. This boycott made the national news and Atkinson immediately returned, backing up Herrick, saying that decisions concerning student conduct would continue to be made by the administration without consulting the students.

Another form of rebellion animated the production of the 1933 yearbook, the Montanan. Dave Rivenes, editor of the yearbook that year, decided to stand up against the conformity-minded administration of the time. The yearbook poked fun at the faculty, the administration, and fellow students. While not popular in the office of the MSC president, the 1933 yearbook won a national award for being the best such student publication that year.

In 1935, the Alfred Atkinson Quadrangle was completed opening up a new style of living for female students who desired to live on campus. The Quads, as they are still known today, were built on the sight of the Bobcat Lair, a popular gathering place for the students of Montana State College. 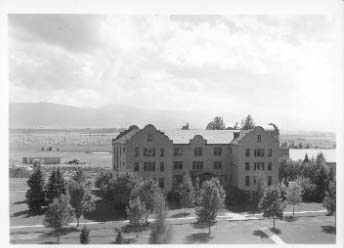 In 1937, Atkinson resigned and was replaced by A.L. Strand, an entomologist who had made a name for himself in the early 1930s by developing measures to combat the locust invasions of the decade. Strand had sweeping goals in mind for the college, but first had to help it regain its feet after the depression decades of the 1920s and 1930s. As a sign of returning hopes for recovery, the Student Union (now the Strand Union) Building was completed, giving students a place to congregate outside of the residence halls.