The 1980s was a decade of "boom or bust." During the first years of the decade, Montana's economy was strong due to an increase in coal, oil, cattle, timber, and grain prices. There was a budgetary surplus of nearly $100 million that led the legislative session of 1981 to approve a fifteen to seventeen percent increase in state spending for public education and the Montana University system. Under the leadership of President William Tietz, MSU faculty salaries rose 15 percent and thirty new faculty positions were added to an overworked instructional staff. Overall, MSU's instructional and operational budgets increased almost $10 million above the 1980-1981 level. From the monies made available by the 1981 appropriation, MSU was able to build a film and TV center, a new animal laboratory, and create a writing center administered by the English department.

In the mid-1980s, the coal, oil, and agricultural industries fell on hard times. By the end of the 1980s, Montana's natural resource tax revenues had fallen 57 percent. MSU was hit hard by Montana's economic crisis and was forced to cut many popular programs and even slated the architecture program for elimination. Supporters of architecture across the state fought back and the campus administration was forced to back down. 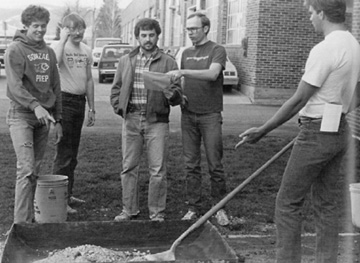 Not everything was grim in the 1980s. First created 1967, Native American Studies witnessed a period of growth in the 1980s. By the middle of the decade, the program had generated millions of dollars of federal funds making MSU one of the leading institutions in the United States for American Indian education.

The decade of the 1980s was filled with ups and downs. In 1984, the MSU Bobcat football team won the NCAA Division I AA national title. And, despite the economic hardships, MSU had taken a major leap forward. As Vice-President for Research John Jutila put it, "A spirit of inquiry" had taken hold of the campus and MSU had become a "highly respected institution known for its clusters of outstanding programs and for a general excellence among the faculty that surprises those who evaluate us." In addition to its reputation for quality teaching, MSU had gained a national and international reputation for research excellence.