The 1940s opened with war in Europe and Montanans deeply divided about the wisdom of joining the crusade to stop fascism. By the end of 1941, after the Japanese bombing of Pearl Harbor, opposition to the war virtually disappeared. With Montana's able-bodied young men fighting in the war, MSC's male student population was significantly depleted. As a result, enrollments dropped drastically, leaving fraternities almost non-existent, men's clubs and other organizations bereft of members, and a campus with new opportunities for women. The women on campus filled the vacuum left by the men, with some enrolling in the programs usually viewed as male disciplines such as agriculture and engineering. With the start of U.S. involvement in the war, trained nurses were drawn out of the hospitals around the country thus causing the rapid expansion of MSC's nurse-training programs.

President Strand resigned in 1942, and engineer William Cobleigh filled in for a year. Also in 1942, there was a statewide panic as the sugar beet crops neared harvesting. If the beets were not harvested on time, beets would rot in the ground, resulting in a huge monetary loss for farmers and in major shortfalls for the U.S. war effort. Therefore, all the male students from the state colleges and university were released from classes in order to go to eastern Montana to aid in the sugar beet harvest. Then, in 1943, agricultural economist Roland Renne was offered the position of the MSC presidency, which he accepted and kept until 1964.

Enrollment skyrocketed in 1945-46 with the return of the veterans, doubling the previous year's figures which increased by another 50 % in 1946-47. This surge in the numbers of students allowed all of the clubs and organizations to reopen after the drop in enrollment earlier in the decade. Surging enrollments also allowed for the creation of new activities. After the war, rodeo and downhill skiing were added to MSU's constellation of sporting activities.

Perhaps the biggest problem confronting the College after the war was finding adequate facilities to house and teach its growing numbers. Returning veterans were housed in trailers and a number of large frame buildings from mining projects in the state were used as classrooms. It would be early in the next decade before steps were taken to rectify this situation, but many of the temporary structures set up after World War II remained campus fixtures until the 1970s. 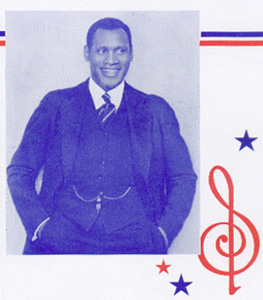 Singer Paul Robeson visits MSU and shortly thereafter sends a letter to the students praising them for their patriotism, 1944, Montanan