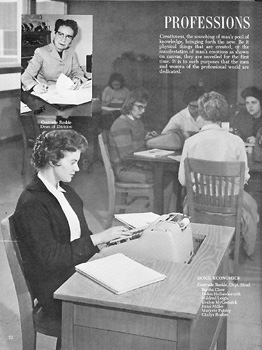 On campus, the still conservative student body could not escape the influence of President Kennedy's idealism. His assassination in 1963 solidified a growing liberal sentiment on campus. At this time, students started to direct their energies toward eliminating many of the rules that governed student life previously. During the early sixties, MSU still accepted the traditional roll of in loco parentis and monitored student life strictly. Social events required chaperones, alcohol was prohibited on campus, and all freshmen and sophomore men were required to undergo mandatory military training. The appearance, in 1963, of the Stiletto, an underground newspaper, challenged many of the college's conventions and hinted at broader changes in the college's future.

During the late sixties, campus radicalism was spreading throughout the nation. In 1968, the year of the riots in Chicago around the Democratic National Convention, MSU President Leon Johnson was questioned by a state legislator about campus stability. The president responded that MSU was quiet, absent of any "important controversy around which students would rally." The MSC president pointed to parking 4000 automobiles on campus as generating more concern than the Vietnam War. The college president exaggerated. There was concern on campus about the war and by the early 1970s it was escalating.