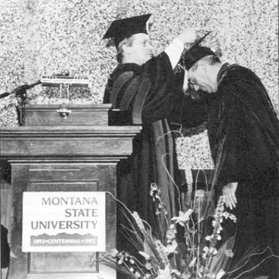 Michael Malone's Inauguration as MSU President 1991, In the People's Interest

In 1991, MSU historian Michael Malone became president of MSU. President Malone took an active approach to changing the environment in which the university's students learned. Over the course of his presidency, he lobbied the state legislature and won approval for funds to expand the Burns' Telecommunication Center and to complete the Engineering and Physical Sciences Building and the Agriculture Biosciences Building. An avid Bobcat fan, he rarely missed a game and oversaw the renovation of the fieldhouse and football stadium. In 1993, MSU celebrated its hundredth birthday with a new motto, AMountains and Minds." Embarking on a private fund-raising campaign, President Malone accomplished a long-time goal of uniting the campus by giving the go-ahead for the creation of the Centennial Mall with network of walkways, benches, and entry gates named for prominent MSC and MSU alumni.

A variety of issues affected the students over the course of this decade, starting with the Persian Gulf War. The attitudes of students on MSU's campus mirrored those of citizens across the country. Some questioned the rationale behind U.S. involvement, while others enthusiastically supported the decisions made by the government.

Also on the minds of students and community members was the administration's decision to end the University's role in hosting the College National Finals Rodeo. This event had been held in Bozeman for a number of years, but President Malone felt strongly that sponsorship of the event by the tobacco industry sent the wrong message to students.

Another issue that occupied the campus community was the plan to create an environmentally-integrated "Green" Building. Partial funding was approved by the state legislature and student voted to have the fees raised, but the building proved difficult to get off the ground.

The 1990s witnessed expansion in a number of important areas. International Studies, first a dream of Professors Harry Hausser, Robert Dunbar, and Ken Bryson back in the 1960s, came into its own and opened important study-abroad programs from MSU students. The University Honors Program continued to offer innovative classes across the curriculum. And a very active Residence Life Association, made up of students living on campus, put on barbecues, intramural sports, and dances, while the Associated Students of Montana State University (ASMSU) Entertainment Committee brought guest speakers, musicians, comedians, and traveling dramatic performances to campus. 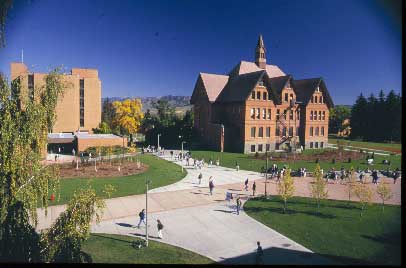 Montana Hall and the Centennial Mall in the middle of campus.

The decade ended on a tragic note with President Malone's death in 1999. Because of his accomplishments as a historian of the American West and because of his accomplishments as president of MSU in positioning Montana for the globalizing economy of the 21st century, President Malone had just been awarded the honor of being one of the 100 Most Influential Montanans in the Twentieth Century. Although he didn't live to see the Class of 2000 graduate, he might very well have urged them on with one of his favorite maxims: "Get it done, Pilgrim."